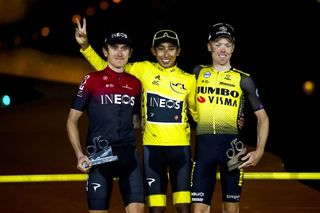 The 2020 Tour de France route will be presented in Paris on October 15, but, as ever, reports leaks and rumours about the parcours and key stages have been circulating long before the big reveal.

Next year's race will start a week earlier than usual in order to allow riders to compete in both the Tour and the 2020 Olympic Games. The Grand Départ will be in Nice on Saturday, June 27, while the final promenade on the Champs-Élysées will take place on Sunday, July 19 – a mere six days before the elite men's road race in Tokyo.

Local French newspapers are always an invaluable source of Tour-route information, while, as is now tradition, Thomas Vergouwen at the VeloWire website has sifted through the truth and rumour to collate an overview of what the complete route might look like.

The broad brushstrokes indicate that the Tour will take in some early climbing around Nice, then enter the Pyrenees in week two before tackling the Alps in earnest in the final week. The most eye-catching (rumoured) innovation is a possible time trial up the climb of La Planche des Belles Filles on the final Saturday.

At this point, the only two certainties on the 2020 route are the opening two stages, which both start and finish in Nice. The Grand Départ in the capital of the Alpes-Maritimes department was announced in 2018, while the full details of the 2020 Tour's opening weekend were revealed in March of this year.

The 170km first stage is composed of two circuits of differing lengths around Nice, and although the climb of Levens features, the flat run-in means that a sprinter ought to pull on the first maillot jaune of the race on the Promenade des Anglais.

The ascent of the Turini is unlikely to prove decisive given that it comes some 90km from the finish, but it will offer a robust test ahead of a demanding finale in and around Nice. The Col d'Èze (7.8km at 7%) is scaled with a little over 30km to go. The peloton crosses the finish line on the Promenade des Anglais for the first time with 17km remaining before climbing the stiff Col des Quatre Chemins with 9km to go.

This will be only the Tour’s second time starting in Nice – Bernard Hinault won the prologue in 1981 – and, indeed, Grands Départs in this azure corner of France are relative rarities in the race’s history. Race director Christian Prudhomme noted that this will be just the seventh time the Tour has started in south-eastern France, which, by dint of geography, ensures a testing opening.

"It immediately places the riders in front of the challenge of mountains," Prudhomme said.

The Tour’s recent south-eastern starts compelled the race to take on the Pyrenees before the Alps. This was the case in 2013, when the Grand Départ was in Corsica, and Nice hosted the first stage on the mainland, and in 2009, when Monaco hosted the opening stage.

In 2020, it appears that the Tour will again follow the rough template of traveling westwards during the opening week, although not without another brief but weighty foray into the Alps first.

Stage 3 is rumoured to bring the peloton northwards from Nice to Sisteron, while Dici.fr has reported that the following day’s stage will enter the Alps once again for a summit finish at Orcières-Merlette. The name is an evocative one, redolent of Luis Ocaña’s remarkable solo victory on the 1971 Tour, when he seized yellow from Eddy Merckx, only to crash out four days later on the rain-lashed descent of the Col de Menté.

Orcières-Merlette last featured on the Tour in 1989, when Steven Rooks won an individual time trial and Greg LeMond moved into the yellow jersey. The 1840m-high ascent is not the most daunting – 11km at an average of 5.9% – but a summit finish so early in the race is always a crucial rendez-vous.

There may even be a second one just two days later, with France Bleu reporting that Mont Aigoual in the Massif Central is in line to host the finish of stage 6, although it adds the caveat that Mont Aigoual has "strong chances but no certainties yet". The ascent has only once featured in the Tour, on the road to Avignon in 1987.

If, as rumoured, the Tour takes the road from Meyrieus, it would make for a long but relatively gentle ascent of 26km, broken up by three false flats and short descents. The final kick towards the panoramic view at the summit, meanwhile, could well suit a finisseur of Julian Alaphilippe’s aptitude.

The Pyrenees and the Massif Central

The specific predictions of the crystal ball grow a little faint at the end of the first week, but the hazy general picture suggests that the race will hit the Pyrenees on the second weekend, as was the case on both the 2009 and 2013 Tours.

La Dépêche du Midi has reported that stage 8 will set out from Cazères and take in the Col de Portet-d'Aspet, le Col des Ares, le Port de Balès and the Col de Peyresourde before dropping to the finish in Loudenvielle.

Having learned of a spate of hotels being block booked in Tarbes, meanwhile, Velowire expects another mountain stage to come the next day, before the Tour’s first rest day on Monday, July 6. The website expects the race to jump north to the central French coast and into the Poitou-Charentes region above Bordeaux in the second week, with a first stage finish in Poitiers since 1994 possibly on the cards.

The route should sweep back eastwards during week two, traversing the Massif Central en route to the Alps. France 3 Auvergne Rhône Alpes has suggested that stage 13 could feature a finale on the Pas de Peyrol, which has featured 10 times on the Tour but never as a stage finish. As in 2019, the third weekend of the race could comprise a brace of stages in the Massif Central, with one leg anticipated to be between Clermont-Ferrand and Lyon.

It seems likely that the Alps will figure heavily in the final week of the Tour, although precise details are still scarce. After a second rest day in Grenoble, Velowire suggests the race will enter the Vallée de la Tarentaise, based on hotel bookings in the area.

According to local newspaper Le Dauphiné Libéré, there will be a summit finish on the Col de la Loze, a brand new traffic-free high-mountain pass between Méribel and Courchevel. At 2304 metres, it's the seventh highest pass in France and would see the riders ascend from Brides-les-Baines up to Méribel and its altiport (last used in 1973) before taking on the newly-made 6km cycle track to the summit.

Le Progrès reports another third-week mountain-top finish on the Grand Colombier, which has been appeared several times in recent years but never as a summit finish.

Under Jean-Marie Leblanc’s stewardship, the Tour tended to leave the mountains midway through the third week and take in a flat individual time trial on the final Saturday of the race. Christian Prudhomme, on the other hand, has displayed an inclination towards holding a mountain stage as close as possible to the grand finale in Paris. In the last decade, the penultimate stage of the Tour has been a mountainous one on no fewer than five occasions: Mont Ventoux (2009), Semnoz (2013), Alpe d’Huez (2015), Morzine (2016) and Val-Thorens (2019).

In 2020, La Planche des Belles Filles appears to be in line to play host to the Tour’s mountainous denouement. The ascent in the Vosges was on the route this past year – replete with an additional kilometre of dirt road – and it may feature in another novel way next July.

L'Est Républicain has learned of flurry of hotel bookings in Belfort on July 17 and 18, leading to speculation that La Planche des Belles Filles will make a rapid return to the parcours. Furthermore, the newspaper suggests that the stage may take the form of an individual time trial or between 16 and 25km in length.

One can see how the narrative of a mountain time trial in Groupama-FDJ leader Thibaut Pinot’s backyard on the eve of the final stage in Paris would appeal to ASO.

That kind of dream scenario for the Frenchman remains as conjecture until the lights go down in the Palais des Congrès on October 15.