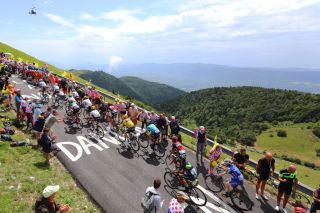 The 2020 Tour de France could feature two unprecedented summit finishes, as more details of the potential stages in the Alps and Jura emerged this week.

The full route for the 107th edition of La Grande Boucle will be unveiled in Paris on October 15, but local newspaper reports point to mountain-top finales on the Col de la Loze and the Grand Colombier in the final week.

The Dauphiné Libéré newspaper, which covers the region in and around the Alps, reports that the Col de la Loze, a newly-created traffic-free high-mountain pass between Courchevel and Méribel, will feature as the final climb on stage 16.

It was previously possible to ride and drive up to the altiports above Méribel and Courchevel, but not to the top of the mountain. Now, local authorities have paved six-kilometre tracks on either side that are reserved for cyclists. At 2,304 metres, it is the seventh highest col in France.

The Col de la Loze was used in the Tour de l’Avenir in August, with a blisteringly short road stage from the valley in Brides-les-Bains to the summit. It is this 23km climb – with an average gradient of 7.7 per cent – that is reportedly to be used on stage 16. According to the Dauphiné Libéré, the stage will start in Grenoble and take in other mountain passes – potentially the Col de la Madeleine – en route to the Loze.

The climb from Brides-les-Bains to the ski resort of Méribel was used in the 2016 Critérium du Dauphiné, with Thibaut Pinot winning the stage. The extra 4km to the altiport featured when Méribel last hosted a Tour finish all the way back in 1973, when Bernard Thévénet was the winner.

The rumoured stage in 2020 would see the riders go six kilometres further on the newly-paved cycle track, which is little over 4m wide. It’s also steeper, with an average gradient closer to 10 per cent and several ramps well into the double digits. Breaking the 2,000-metre altitude barrier, it would be a day for the purest of climbers.

We could see, in quick succession, another finale on a mountain pass, with Rhône-Alpes newspaper Le Progrès reporting the inclusion of the Grand Colombier as a finish location. The 1,500-metre mountain, which is in the Jura range rather than the Alps, is familiar to the Tour but has never been used as a summit finish.

There are no fewer than four roads to the top, but Le Progrès does not mention which one might be used. In 2017, the hardest one – 8.5km at 9.9 per cent from Virieu-le-Petit – was used in the middle of the stage to Chambéry won by Rigoberto Urán. In 2016, the Grand Colombier was used twice in the finale – first from Lochieu (12.8km at 6.8 per cent) and then up the 'Lacets' from Culoz (8.4km at 7.6 per cent). On that occasion the riders turned off at the top of the Lacets to descend to Culoz, where Jarlinson Pantano beat Rafal Majka, but in 2012 that road continued to the summit, where Thomas Voeckler led solo and won down in Bellegarde.

Le Progrès reports that a Grand Colombier stage would likely take place on stage 18 on July 16. The penultimate stage is heavily rumoured to involve La Planche des Belles Filles – possibly in the form of a time trial – with a transition stage needed to get from the Jura up towards the Vosges mountains.

It has already been confirmed that the race will start in Nice in south west France, with a flat stage and a hilly stage. After that, reports and rumours so far point to a visit to the Pyrenees on the second weekend, ahead of the first rest day, before a trip north and then east across the Massif Central to the Alps.