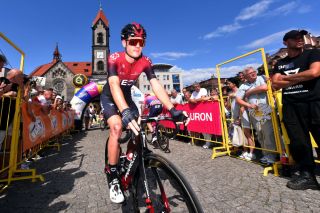 The 2019 season has not yet drawn to a close, with the UCI Road World Championships still on the horizon, but Russian sensation Pavel Sivakov (Team Ineos) has already given thought to his Grand Tour plans for 2020.

After finishing a fine ninth at this year’s Giro d’Italia, the obvious next step might have been for a return to the Corsa Rosa in a bid to improve on his previous result, but the 22-year-old instead has designs on making the Ineos squad for the 2020 Tour de France.

"We’ll analyse the season, once it’s done, with all the team and the coaches, but for sure I want to develop. It’s great either way if I do the Vuelta or the Giro, but why not try for the Tour? It could be another massive step in my development. We’ll see,” he told Cyclingnews after finishing fourth last week at the Tour of Britain.

This has been a breakthrough season for the Russian rider, who already came to Team Ineos as one of the most sought-after and talented Under-23 riders. As well as his mature performance at the Giro d'Italia, he also claimed the Tour de Pologne and the Tour of the Alps this year.

While Sivakov is proud of his 2019 achievements, the bigger picture clearly matters to him. Rather than focus on a GC bid in a Grand Tour next year, he sees the next phase of his development as riding in support of someone like Chris Froome or Egan Bernal at the Tour de France. He believes that in that scenario, and on that terrain, he will learn the most.

"In my opinion, it’s been great, and I proved a lot for myself in the Giro. But for now, for example, if I go back to the Giro and aim for another top 10 or top five, it’s good, but is it really what I want?" he asked.

"I want to develop and why not develop and be ready to win something? That will be the time for me to go as a leader, but at this time I’m happy to go and help the guys to win and learn from them.

"There were a lot of areas I stepped up in this year," he added. "Physically, I improved a lot on the climbs, and overall I feel stronger. I feel like I can make the race now and not just follow like last year."

The season has not yet finished for Sivakov, and he will return to Britain next week as he prepares to lead the Russian Federation into the World Championships. His best results there as an U23 rider were underwhelming in comparison to his other results from that time in his career, but he heads to Yorkshire with an outside chance of affecting both the time trial and road race, in which Russia will field a team of six.

"I think I’ll be the leader, and the Tour of Britain has been really good preparation for it. I’m not really a quick guy so I’ll try to be in the final, and I’ll try and do something," he said. "For me, that’s the only option – to try to attack a long way before the finish. If I wait, then those guys like Mathieu van der Poel will just smash me."