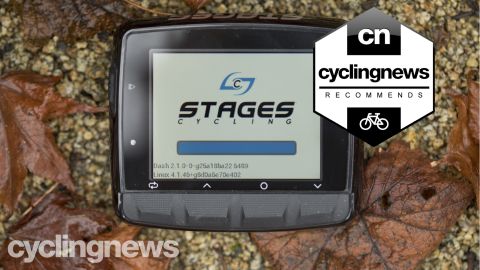 The market for GPS cycling computers has stagnated. As time has gone on, the competition has fallen away or carved out a particular niche. Survey the market today, and two major players dominate the market. Garmin is the biggest and oldest, player in the market and Wahoo has been the upstart competition.

In the current generation, however, the formula has shifted a bit. Wahoo has transitioned from a nimble upstart to an established player. That transition has equipped Stages to develop and refine its range with a line-up that comprises the new L50 and M50 computers.

The Stages L50 is a solid, well-built unit that features quality plastics and metal accents. It feels substantial, and nothing about the L50 is particularly svelte. Yet despite the large feel, it's actually similar in size to its rivals.

Stages has employed a unique mounting solution. It's possible to choose either a portrait or landscape layout depending on how you like to have your data fields arranged. When mounted in the horizontal positon, it's a bit wider than a unit such as the Wahoo Elemnt Roam, but also shorter.

As with other GPS cycling computers, the screen is what dominates the design of the L50. For Stages, that works out fine. The EverBrite LCD screen is not a touchscreen, but it is the brightest, full-colour option on the market. At 2.7 inches, with a resolution of 400 x 240 pixels, the other screen specs fall right in line with market leaders. There is, however, a sizeable gap between the front glass of the L50 and the screen face. In use, this isn't a big deal, but combined with beefy bezels, we do think it's a missed opportunity for a more contemporary feel.

Along the length of the unit, there is a row of buttons, with an additional button on the side of the short edge. As with the rest of the design, the buttons feel substantial and easy to navigate even with thick winter gloves.

Stages has employed a custom Linux build to power the unit. Compared to the market leaders, the design details feel built by engineers more than designers. For some people, that will speak perfectly to a no-nonsense sensibility but others might wish for a bit more refinement. Regardless of where you fall on that spectrum, the use of Linux operating system is a good way to wring every last bit of speed and battery, out of more efficient hardware.

Linux efficiency is also reflected in the disk space left available for mapping. With 12.5 GB of space available, there isn't much need to worry about maps loaded on the unit. If you do decide to make changes, though, you'll find maps covering the entire world. Adding or removing them is a simple checkbox.

If you've changed what maps load to the Dash, or customised anything, it's easy to sync via a USB cable and the Stages Sync app. If syncing via a USB cable feels a bit outdated, there is also onboard Bluetooth. Connect to the L50 via Bluetooth with the iOS or Android companion app, and sync changes made through the website. You can actually handle many of the custom pages directly in the companion app, but not everything is in both places yet. WiFi is not an option for syncing, as it's missing from the hardware. Bluetooth makes this deficit mostly irrelevant, though.

The Stages reputation is all about giving data-oriented riders everything they could ever want. None of that has disappeared with the L50 and Stages has somehow managed to thread the needle with features for all types of riders.

No doubt, you've seen the press pictures featuring the big colour watts wheel. What that screen is all about is knowing exactly what zone you are riding in. If you are the type of person who tracks their fitness and riding metrics very closely, then Stages has everything you need. Log in to the Stages Link website (for free) and you'll have every metric you could need along with the ability to display it exactly how you want while riding.

The L50 has introduced a whole range of new features for the people who like to head out on a ride and see where the road takes them. While other units on the market are great for following a dot on the screen, Stages has detailed cycling-specific maps. Street names are visible, road sizes are highlighted via colours, and there are extensive points of interest included.

The base maps, as well as zooming and panning with the hardware buttons, mean that you'll never need to depend on your phone for navigation. In urban areas, it's easy to find nearby services. Caught in a heavy downpour and in need of another tube? You're able to scan the area for a bike shop.

When it comes to GPS capable head units, the market needs competition. Stages is bringing that competition with the L50. IS it as good as its rivals from Garmin and Wahoo? We think so. The Stages L50 is a genuine competitor and, even at this early stage, the Coloradoan company has nailed the stability and intuitive setup that users of Wahoo prize.

The colour screen is, without a doubt, impressive, but it's actually not the real story of the L50 computer. The features that tell the story of the L50 have to do with the mapping and the battery life - in this case, up to 23 hours.

It's also important to keep in mind all of the features of the Stages-Link website. Stages has provided a robust ecosystem with a mix of free and available paid features, that means you can likely leave other cycling websites behind. Track your fitness over time, put together a training plan, and even build maps all from one website.

It's also competitively priced which is a real bonus. As it stands, the Stages L50 is a worthy alternative that will prove popular among riders who enjoy both number crunching as well as taking the road less travelled. Perhaps a group test is in order?