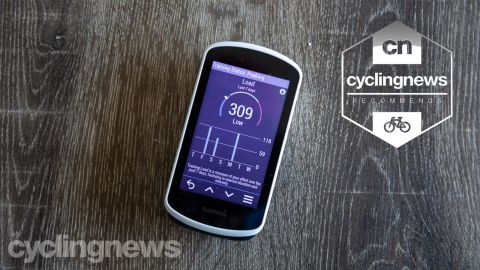 Highly functional headunit with almost every bell a whistle money can by, provided you're not a mountain biker

Despite the Edge 830 and 530 gnawing at its heels, the Garmin Edge 1030 still occupies the top step of the GPS giant's current range. While a string of new inhouse tech and firmware updates have kept it largely up to date over the years, its biggest threat comes from the unlikeliest of rivals...

With a 3.5in colour touchscreen display, the screen is massive and so is the computer. Out in front of the bike, it takes up about the same amount of room as the Sigma Rox 12, but the screen better utilises the available real estate. The computer itself measures 58 x 114 x 19 mm and tips our scales at 126g.

The touchscreen isn’t as sensitive as a smartphone or the Sigma Rox 12 that we recently tested for that matter. Like the USB charging port the start/stop and lap buttons are situated on the bottom edge. The power button is on the left side. With the included mount, which holds the computer inline with your bars, there is plenty of clearance to access the start/stop and lap buttons. The mount is sturdy and holds its position, even when traversing corrugated singletrack sections by mountain bike.

On the back of the unit, there are provisions for a MicroSD card to expand the internal memory, which can hold up to 200 hours of rides, 100 courses and 200 waypoints. The quarter-turn mount also features contact points for the Garmin Charge power bank, which connects to the bottom of the included mount and is claimed to provide an additional 24-hours of battery life.

Even though the computer itself is massive, the white trim around the screen is classy and adds to its refined appearance - it is still easily one of the best-looking cycling computers on the market.

Sitting at the tippy top of Garmin's hierarchy of cycling computers it's no surprise that there is no shortage of bells and whistles, including many of the features launched with the newer Edge 530 and 830 — but not all of them.

With the latest version of the firmware (at the time of writing), the 1030 has ClimbPro, Heat and Altitude Acclimation, Training API support, hydration and nutrition tracking and alerts, and some of the new mountain bike metrics like Grit, Flow and Jumps. However, one notable omission is Trailforks integration. The current maps do feature some trails, however, they are not nearly as detailed as those found on the 830, and Garmin has decided against adding the ForkSight features, which automatically shows you a trail map when you stop on a mountain bike trail. There is a Trailforks Connect IQ app which does allow you to download routes but doesn't replace the ease of the integrated maps.

The maps of roads, however, are incredibly detailed, and courses can be either uploaded via Garmin Connect; IQ apps such as Strava Routes, Komoot or Trailforks; or created directly on the device by searching points of interest, cities, addresses or dropping pins on a map. Although Garmin says it creates routes on the device using Trendline proprietary heatmaps, it usually takes you on the most direct route, rather than quieter streets frequented by cyclists.

My test utilised the Darren Smith Memorial Route, which is without question the most popular cycling route in the area. The reason that this is the perfect test for such heatmap-based cycling features is that the DSMR runs parallel to the Gold Coast Highway, taking quiet side streets the entire way. And, just as the Wahoo Elemnt Roam, Sigma Rox 12 and more budget-friendly Bryton Rider 420 before it, the Edge 1030 tried to route me down the highway. What's worse, trying to search for a route or POI on the device using the ABC keyboard takes a surprising amount of mental horsepower, especially given we are all well adapted to the QWERTY keyboards found on our phones.

When navigating, the Garmin provides ample instructions to alert you of an upcoming turn, even if you have swiped away from the mapping screen. If you do overshoot a turn, the computer will try and get you back on course, however, this seems to usually result in u-turns rather than trying to meet back up later on the route. Whether you are following a course or not, the Edge 1030 (and other Garmin units) will give you a heads up about road hazards like sharp bends. This is a feature I wish more computers had, and these alerts have helped me keep the rubber side down whether riding a descent for the first time, or just being brain dead nearing the end of a five-hour ride.

When the road points up the 1030 will automatically switch to the ClimbPro screen should you come upon a big enough hill when following a course. It shows you a colour-coded elevation profile, which not only lets you know if you've made it to the top of the climb but also prevents false summit heartbreak. This feature does exactly what it says it does, and is brilliant for pacing, or trying to figure out where to attack in a road race.

The device will track every metric under the sun, and the large screen can be well utilised to display graphic versions of metrics like power, HR and speed as well as more advanced metrics such as LR power if you have the right sensors. The screen will display up to ten parameters, with the blocks still readable as the screen gets crowded.

In addition to the training screens, you can define different activity modes, with the computer coming out of the box with Road, Mountain and Indoor screen options. Here you can customise data fields as well as define different bikes, so the head unit isn't wasting battery searching for the power meter from your road bike when you're on a gravel ride.

The 1030 can connect to both ANT+ and Bluetooth sensors including electronic drivetrains and has support for the Garmin Varia lights, both for control and radar. This is actually the first Garmin head unit I have ever used which hasn’t unpaired from and/or forgotten sensors all on its own, and I had no issues with the ANT+ connectivity. Bluetooth, however, was an entirely different story.

The computer would randomly drop the Bluetooth connection to my phone both during rides and while trying to sync courses and complete activities to GarminConnect. I could always tell precisely when this would happen on the road because the computer would light up with a gazillion notifications. This seems to be an ongoing problem with the Edge computers, and I've had the same issues with the Edge 130, 830 and now 1030, on two separate iPhones. I've had no such problems with Wahoo or Bryton computers.

For a top-end unit, the Edge 1030’s claimed 20-hour battery life is on par with similarly priced head units from other brands — with the notable exception of Bryton, which adds on another 16-hours. Running the screen on ‘Auto’ brightness, and pairing a power meter, HR strap and Varia radar rear light, the 1030 seemed to run out of juice at around the 18-hours mark.

With the new Training API, workouts can easily be pushed directly to the device from services such as TrainerRoad, Today's Plan or Training Peaks. I have been a long time fan of TrainerRoad’s ‘do outside’ functionality, and the workouts automatically sync to the head unit. With the big screen, there is plenty of real estate to show the upcoming intervals and your progress through the workout, as well as a colour-coded slider that tells you whether or not you’re hitting your targets.

On the other end of the training spectrum is the Firstbeat Training status information. Keeping track of things like training load, training stress and VO2 max. One other feature of note is Garmin's Incident Notification. On paper, it’s a feature I would spend extra to have but in practice, it is worse than useless. In my testing period, I set the incident detection off following a series of jumps not to mention every time I rode a particular rock garden at my local trail network and stopping for a stop sign. I also have a Specialized ANGi stuck on the back of my helmet and have had zero false positives in the same period. This problem has been widely reported across every head unit since the launch of the 820. To me, it seems Garmin would be better off supporting something like ANGi as Wahoo have done.

The Garmin Edge 1030 is a powerful cycling computer if you plan to use it as a training aid or a navigation tool. With the sizeable detailed colour screen and breadth of features, it does offer more functionality than most other head units on the market.

I have a checkered past with Garmin head units and have experienced first hand the full gamut of problems — including two bricked Edge 520s in less than six months. However, the Edge 1030 has proved to be by far the most reliable Garmin cycling computer that’s been attached to my bike since the original Edge 500 — even with the Bluetooth issues. Although the big screen doesn’t quite match the Rox 12, it’s still pretty darn good and shows more than enough detail, whether that be data or mapping.

The Edge 830 has all the same features, plus native Trailforks maps, the same 20-hour battery life and costs less money. The decision ultimately comes down to how much you value screen size - if that’s your top priority then Edge 1030 will leave you like a pig in mud. If it were me, until Garmin adds Trailforks and ForkSight, I would spend my money on the Edge 830.