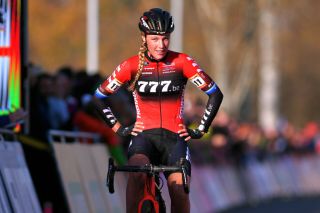 Annemarie Worst (777) won the elite women's Vlaamse Druivencross in Overijse on Sunday. Worst was the strongest throughout the technical course that saw her out-ride runner-up Lucinda Brand (Telenet-Baloise) and teammate Alice Maria Arzuffi (777).

"It was a tough lap and everything is in it," Worst said in a post-race interview. "This course suits me well. I noticed in the first lap that it went well and that I had to lead the way. I managed to make a difference on the technical parts."

Worst led for much of the race, uncontested throughout the challenging circuit, and won my over a minute ahead of her rivals.

Worst competed in the previous day's Hotondcross, where she was second behind Ceylin del Carmen Alvarado (Corendon-Circus). She said both races were challenging because of the wet and muddy conditions.

"They were two difficult and heavy [races], but I didn't mind that," she said.

Alvarado didn't participate in Overijse but the start line included Dutch champion Brand, who said she struggled with the technical aspects of the course.

Brand said she didn't find her rhythm until the final lap but had just enough strength to hold off Arzuffi for second place.  "I think I was a little better physically, so I'm glad I could keep her off," Brand said.