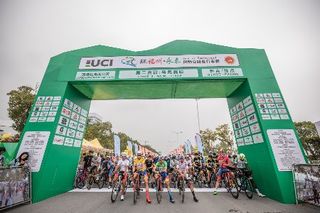 Mongolia's Jambaljamts Sainbayar of Ferei Pro Cycling Team created a surprise as he won the queen stage of the 8th Tour of Fuzhou before Colombia's Carlos Quintero (Ningxia Sports Lottery Livall Gusto) and Artur Fedosseyev (Shenzhen XDS) who moved into the lead in the overall classification, taking over from his teammate and Kazakhstani compatriot Ilya Davidenok. The defending champion fell uphill on the slippery road to Yun Ding, the iconic climb of the county of Yongtai.

"I stayed quietly behind the top climbers and I took my chance before the last corner," Sainbayar explained. "I knew this stage could be a good one for me. It makes it a very big victory for me. It's my first international win."

Fedosseyev said he knew of the climbing abilities of the 23-year-old since he raced him on a number of occasion in hilly races in China at national level. He escorted the race leader uphill and slowed down the front group when Davidenok crashed but the four seconds time bonuses of the third place and the little gap between the two Kazakhs on the foggy finishing line of Yun Ding combined to earn him the yellow jersey on the eve of the conclusive stage in Yongtai.

"I rode the whole climb at the service of Ilya," Fedosseyev said. "It's very unfortunate that he had this crash and his knee injury. Now I'm first and he's second. We'll have to control the last stage nicely to finish it off."