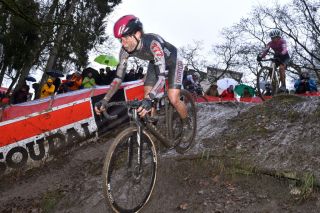 "It was quite muddy and I had to push a lot on the pedals but actually but after last Sunday I wasn't sure about today. I'm happy to take the win. This is my second Superprestige of my career and I'm looking forward to the rest of the series," Arzuffi said after her win.

"There wasn't really a plan today but we have three really strong riders in our team so we try and look after each other a little bit. When we closed the gap it was my time to go away and when I that I had some meters of a gap I knew that it was my time."

Ceylin del Carmen Alvarado (Corendon-Circus), the winner of the first round of the Superprestige series, was in contention for much of the race, but a fall on the final lap scuppered her chances and she was unable to come back on terms before settling for a place off the podium. It was a similar situation for Lechner, who crashed on the first lap and spent most of her race chasing. She made it back to the lead group late on and immediately distanced several riders in the chase group, but the Italian champion was unable to reach Arzuffi in time.

World champion Sanne Cant struggled on the climbs throughout the race but her technical skills kept her in contention. She was dropped several times but made it back on each occasion before having the energy to follow Lechner in the closing stages and take third at the line.

By the end of the first lap a clear pecking order had been established, with Alvarado, Cant, Annemarie Worst (777), and Yara Kastelijn (777) leading the race through the muddy sections that littered the course. Even in those early stages Cant appeared to be struggling, as each time the race began to climb she looked over-geared.

Worst had to then come back from a poor bike change, before Arzuffi and Inge Van der Heijden (CCC-Liv) made it a six-rider lead group. Alvarado, who won the opening round of the series a week ago, stretched the field on the second lap as she looked to put the 777 team on the back foot and with Cant again off the back, the Corendon - Circus rider soon found herself with three 777 riders for company.

Kastelijn - third in the first round - attacked on the third lap and it looked as though she would race away for the win as she built on a small but sustainable lead but she fell at the bottom of a muddy descent and was caught soon after.

As the lead group moved towards the final lap Arzuffi made her move and she quickly established a lead of around five seconds. This forced Alvarado to chase but when she fell on a corner it opened up the chance for Arzuffi to stamp her authority on the race. Cant and Lechner mounted a late chase as the rest of the field chased but it wasn't enough, with Arzuffi taking the second Superprestige title of her career.