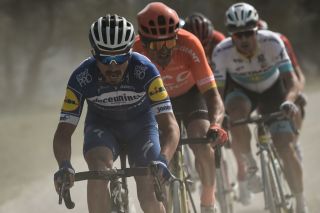 2019 winner Julian Alaphilippe will lead the Deceuninck-QuickStep team at Saturday's Strade Bianche, as the Frenchman returns to racing on the dirt roads of Tuscany.

Alaphilippe won last year's race after a showdown with Jakob Fuglsang (Astana) on the steep Via Santa Catarina climb up to central Siena. The Dane was the first to the top but Alaphilippe jumped past him to dive down into the Piazza del Campo to win the spectacular race that winds through the Tuscany countryside via steep dirt roads.

Alaphilippe went on to win Milan-San Remo and La Flèche Wallonne, before spending two weeks in the yellow jersey at the Tour de France, where he won two stages and finished 5th overall. He has become one of the biggest names in the sport and expectations will be high as the WorldTour returns after five months without racing during the COVID-19 global pandemic.

Alaphilippe was initially due to miss Strade Bianche this season in order to ride Paris-Nice but the Tuscan event was postponed from its original early March date due to the COVID-19 pandemic. It now kicks off the rescheduled WorldTour calendar, with Mathieu van der Poel (Alpecin-Fenix), Peter Sagan (Bora-Hansgrohe), Greg van Avermaet (CCC Team), Philippe Gilbert (Lotto Soudal) and Tadej Pogacar (UAE Team Emirates) all expected in Siena on Saturday.

Alaphilippe will miss Il Lombardia in favour of the Critérium du Dauphiné in mid-August as he builds towards the rescheduled Tour de France but he is expected to ride Milan-San Remo (August 8) and the French National Championships (August 23) ahead of the Grand Départ in Nice on August 29.

The Frenchman will have support from 2015 Strade Bianche winner Zdenek Stybar, who has finished five times in the top 10 at the race. Brussels-Kuurne-Brussel winner Kasper Asgreen and Bob Jungels will also play a vital role in the finale on the steep dirt toads, with Davide Ballerini, Mikkel Honoré, and Pieter Serry completing the strong seven-rider Deceuninck-QuickStep line-up.

Remco Evenepoel leads Deceuninck-QuickStep's other squad Spain at the Vuelta a Burgos before riding the Tour de Pologne and Il Lombardia.

"Winning last year was an amazing feeling, one of my best memories of the season," Alaphilippe said recently.

"I came at the start with a great shape, was really focused and had a very strong team always around me until the race came to life inside the final hour. I love the parcours and the atmosphere of Strade Bianche and it will be interesting to restart the season there, especially as it comes after a different preparation than I had last year."

Deceuninck-QuickStep have recently spent more than two weeks at an altitude training camp in the Italian Dolomites.

"We’ve had many good results here in the past, three wins with as many different riders, and we want to be again up there and feature in the fight for victory, especially as it is a race we like a lot," directeur sportif Davide Bramati explained, highlighting the difficulties of racing Strade Bianche in the peak of the Italian summer, with lots of dirt road dust and high temperatures likely.

"It’s going to be a completely different race than we are used to, with temperatures of 35 degrees and even more dust than usual, but we are going there with a huge motivation after our excellent Val di Fassa training camp and prepared for every type of scenario."

Cyclingnews will have full live coverage of both the men's and women's editions of Strade Bianche on Saturday, with news and interviews from the finish in Siena. Watch Strade Bianche, the first Classic of the restart via live stream, no matter your location, with ExpressVPN.