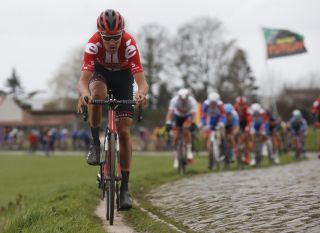 When the UCI WorldTour series resumes with Strade Bianche on Saturday, Sunweb's Tiesj Benoot hopes that he might be able to repeat his 2018 victory at the Italian one-day race, and that the remainder of the 2020 season will be able to be played out without being halted for a second time due to a second wave of the coronavirus pandemic.

The 26-year-old Belgain won the 2018 Strade Bianche in what were wet, muddy conditions, but recognises that this year's race – rescheduled from its usual March slot to this Saturday, August 1 – is likely to be a much hotter, drier and dustier edition.

"Strade Bianche is the race that suits me best at this level," he told Sporza on Sunday.

"I've started it four times and have already finished four times near the front," said Benoot, who finished eighth in 2016 and 2017, won it in 2018 and finished fifth last year. "But it will be a different edition than in March. The temperatures are completely different, which gives an extra dimension."

Benoot said that he feels ready to race for the first time since Paris-Nice in mid-March, where he won the penultimate stage and finished second on the final stage to give him second place overall.

"I've trained well and I think I'm good," he said, "but when you've not raced for so long, you have to wait and see. The numbers point in the right direction.

"I really can't estimate my chances," Benoot said of Saturday's race. "I've not seen the other riders in action for a long time. It feels a bit like it's 'Opening Weekend' again. It's exciting.

"I hope I can compete for the podium," he added. "To do well, everything has to fall into place, but I'd be lying if I said I wasn't feeling ready. I have a good team, and I really want to race. I feel good, but I don't expect anything."

Although Benoot – like his colleagues – is looking forward to the resumption of racing, he's under no illusion that the rest of the season may still not be able to continue entirely as planned if there's a true second wave of COVID-19 in Europe.

"Stopping again would be frustrating, of course, but I'm trying not to think about it," Benoot said.

"In the past week, we've heard about things getting worse again in Europe. Things can change quickly, and you can't predict what might happen. The season could also quite quickly be over again," he said.

"Professional riders are not above such situations. Society would also not agree if there was still racing during a second crisis," Benoot added. "Moreover, positive cases in the peloton are also not impossible."