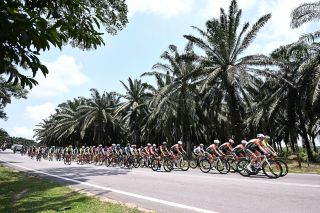 Le Tour de Langkawi goes back to its roots this year. Considering the first edition of Malaysia’s premier international bike race was contested by amateur teams back in 1996, with the overall victory going to the late Australian Damian McDonald, it all started for the professionals in Kota Kinabalu in 1997.

For the second time only, the 25th edition of Le Tour de Langkawi kicks off from the Sabah state on the island of Borneo, with a criterium this Friday before the race proper from Kuching on February 7 to Langkawi on February 14. In addition, a new UCI 1.1 race, the Malaysian International Classic, will be held the following day.

The pros came to Kota Kinabalu 23 years ago, before the young Alexandre Vinokourov was noticed and eventually hired by Casino directeur sportif Gilles Mas. While Paolo Bettini was making his pro debut for MG-GB, Gianni Bugno – then riding for Mapei – was asking incredulous reporters from Europe if they’d be sending their stories via email. They had never heard of this way of communication and were still relying on fax machines.

Le Tour de Langkawi has gone through a tormented history since, but some big names of the sport nowadays – in addition to Vinokourov, Bettini and Bugno – have encountered their early successes in the Malaysian event.

Le Tour de Langkawi is the first Asian cycling event to have impacted the whole world and, once again, riders from five continents attended the pre-race press conference in Kota Kinabalu ahead of the 2020 edition.

There are plenty of opportunities for the sprinters at the eight-stage race, with the general classification battle set to be shaped by the summit finish to Genting Highlands on stage 4.

"It’s a great pleasure to come back. When I took part in Le Tour de Langkawi in 2011 and 2013, I had great results in the summer after," Rolland said, referring to his stage wins in the corresponding editions of the Tour de France.

"Genting Highlands is long and hard. I hope to defend my chances up there but I don’t know exactly where I’m at as I had an accident in December that ruined three weeks of my season’s preparation."

Le Tour de Langkawi is planned as a way to rebuild confidence for Meintjes after two difficult seasons.

"It's my first time here, but the race is very famous in South Africa," he declared. "We have several cards to play, with [U23 world champion] Samuel Battistella who has already raced the Santos Tour Down Under and also in the sprints with Max Walscheid."

Costa Rica’s Kevin Rivera is the next young rider from Androni Giocattoli-Sidermec likely to step up throughout Le Tour de Langkawi, especially on the climb to Genting Highlands, which is set to be decisive.

The race will visit three islands (Borneo, Penang and Langkawi) in addition to crossing over peninsular Malaysia.