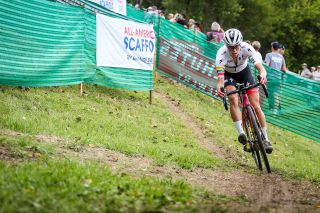 The Pan American champion had to overcome an early crash in the sand section to chase down leaders Inge van der Heijden (CCC - Liv) and Evie Richards (Trek Factory Racing).

The Canadian then regained the front, picked off Van der Heijden and extended her lead before Katerina Nash (Clif) led the chase and bridged across with Clara Honsinger (Team S&M CX).

Honsinger put in an attack with two laps to go, but Rochette showed her class on the run up Mt. Krumpit and the experienced Nash was forced to settle for second at 7 seconds, with Honsinger taking her first podium in a World Cup in third at 15 seconds.

"This is a dream come true," Rochette said. "I have been dreaming about this for a long time – I am a big dreamer and when I started cyclo-cross I initially set my goals and my mind on wanting to win a World Cup and to be one of the best. I just believed it was possible – it means the world. I am super happy, but more importantly, I am super grateful because I did not do this alone.

"The run up on Mt. Krumpit was a key section of the race for me. I realized on the first lap that I was running it a bit faster and so I took advantage. That is where with two laps to go with Clara and Katerina on my wheel, I decided that I was just going to go full gas. I got a little gap and was able to hold until the end."