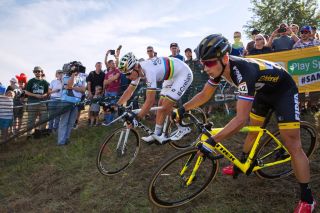 Cyclo-cross season will officially jump into action this weekend when Jingle Cross in Iowa City, Iowa, launches the nine-round 2019-20 Telenet UCI Cyclo-cross World Cup series on Saturday. The Trek CX Cup in Waterloo, Wisconsin, will pick up the baton from there, hosting round two on September 22.

After the American races and a lengthy four-week break, Europe will take centre stage with races in Switzerland, France and the Czech Republic, along with three rounds in Belgium. The series concludes in Hoogerheide, Netherlands, followed by the 2020 UCI Cyclo-cross World Championships in Dübendorf, Switzerland, during the first weekend in February.

The Iowa City and Waterloo races switched places from their starting order of last year, with Jingle Cross taking the opening slot to start the wheels rolling. The proximity of the UCI Road World Championships in Yorkshire at the end of the month may have diminished the fields slightly, with no reigning World Champion Mathieu van der Poel present – nor his arch rival Wout van Aert – for the men, and seven-time World Champion 2018-19 World cup winner Marianne Vos missing the women's opener, but the enthusiasm to start the series is ever-present.

Ringing in the new season

Jingle Cross, which began as a December race and is also a fundraiser for the University of Iowa Children's Hospital, is in its 16th year on the US calendar and its fourth on the UCI World Cup schedule.

"We are excited to have the opening round of the 2019 Telenet Cycle-Cross World Cup here in Iowa City, and the Trek Cup the following weekend gives the series a real international presence," said Jingle Cross founder and race director John Meehan. "With the absence of the two most dominant riders of the last few seasons, Mathieu van Poel and Wout van Aert, the 2019 edition of Jingle Cross is wide open and should make for great racing.

"In the women's race, Kaitie Keough is back after taking her first World Cup victory here last year," Meehan said. "Kaitie has been racing Jingle Cross since she was 14 years old, so for her to take the win last year was extra meaningful for the Jingle Cross staff."

The excitement, of course, is built around Saturday's World Cup opener, where despite missing some of the top names, the fields will be a good representation of the riders who will be battling throughout the 'cross season's biggest races.

The North American men will also be primed to test themselves against international competition after several rounds of the national calendar. Curtis White, Stephen Hyde, Cody Kaiser and Kerry Werner are expected, along with young guns Gage Hecht (Aevolo) and Lance Haidet (Aevolo).