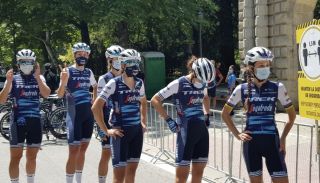 Organisers have confirmed that the Emakumeen Nafarroako Klasikoa will be held on Thursday in Pamplona despite concerns from teams and the riders’ association The Cyclists’ Alliance (TCA) as to whether there were proper COVID-19 coronavirus protocols in place. The riders rolled out of the start just before 4:00pm local time  in Spain.

The organisation released an official communication just hours before the start of the race on Thursday afternoon explaining that only riders who return negative PCR tests will be permitted to participate. The final start list included just 15 of  the 25 teams originally listed on the race website.

Riders from a number of teams were later seen signing-on for the race, with most wearing protective face masks.

"The organization of the Clásica Féminas de Navarra - Emakumeen Nafarroako Klasikoa 2020 wants to officially communicate that it has the negative PCRs of the cyclists and technical staffs of the teams that will start in the race," read a statement from the organisation.

"The organization has excluded from the race the teams that have not submitted the corresponding negative PCR tests. In this way, it complies scrupulously with the health and safety protocol set by the Health department of the Government of Navarra and the members of the organization are in permanent contact with the top medical officers of the UCI.

"On the other hand, the organization has contacted the University Clinic of Navarra to speed up the procedures for the PCR tests for excluded teams who wish to undergo them and thus be able to participate in the race."

The TCA warned of the risks of racing in the Navarra area of northern Spain and of the lack of evidence of testing among race staff and teams. On Wednesday evening, it called on the UCI to ensure that the organisers had followed the COVID-19 protocol.

CCC-Liv were scheduled to compete in the two one-day races on Thursday and Friday with a team led by Marianne Vos and Ashleigh Moolman-Pasio. They announced on Thursday morning, however, that they would not start the races due to fears about new cases of COVID-19 and concerns that other teams and race organisers have not followed the UCI's COVID-19 protocol to ensure a protective, virus-free bubble for the teams.

CCC-Liv stated that they have followed all protocols including daily health monitoring of riders and staff and mandatory RT-PCR tests. In consultation with their team doctors, they decided not to start the two races in Pamplona and instead remain in their protective team bubble in Spain and look ahead to racing Durango-Durango on Sunday.

However, race organisers have denied such claims and said they have followed COVID-19 protocols.

"The CCC-Liv team, without presenting the corresponding PCRs and without notification to the organization, has made the decision not to participate in the race," organisers stated.

"The organization flatly denies the reasons given by the aforementioned team for not being part of the test. Likewise, the organization has informed the team's medical managers of all the documentation that has been required of them."

Bizkaia-Durango announced this morning that they will not compete at today’s Nafarroako Emakumeen Klasikoa because they have not received the results of the PCR tests performed on their riders and staff. They also said that their participation in Friday’s Clásica Femenina de Navarra will depend on the arrival of the results.

Trek-Segafredo’s Lucinda Brand is scheduled to compete in the Spanish one-day races and told Dutch news outlet AD that there has been a lot of confusion at the race, among teams and riders, but that the organisers have promised that no bib numbers will be handed out to riders or teams who can't submit negative test results.

She also expressed concern that it was taking more than two days for test results to be returned and so riders tested on Tuesday or Wednesday may not be able to race.

"At first it seemed that the organization could not explain whether riders were tested or not," Brand told AD. "The large teams and the federation then stressed that it had to be able to prove whether or not riders had been tested. The organisation then said that bib numbers would only be issued if there were test results.

"We, too, had to wait for the results to come in before we got the bib numbers. A small Spanish team got tested this morning, but I wonder how they manage to get the results on time, because we also had to wait two days. I'm assuming everyone on the starting line will be tested."

Brand suggested that the cost of testing riders frequently would add up for teams with smaller budgets.

Trust us, they’re all smiling under those masks 😄20 minutes until racing starts!#NavarraWomens2020 pic.twitter.com/TOcw0SEJapJuly 23, 2020