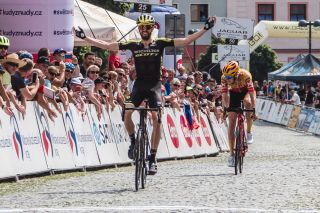 Damien Howson (Mitchelton-Scott) took the stage win on the final day of the Czech Tour to secure overall victory in the four-stage race.

The Australian jumped away with Markus Hoelgaard (Uno-X) on a climb on the final lap around Šternberk after a hilly closing stage. The two went to the line together, with Howson coming out on top in the finishing sprint.

The Australian team had been in the driving seat for much of the race, having won the opening team time trial by 25 seconds. Stage 2 and 3 saw Belgian youngster Jordi Meeus (SEG Racing Academy) take two victories, while Mitchelton-Scott headed into stage 4 holding the top four spots on GC.

"It's awesome, it's been a long time coming, I guess," said Howson after the finish. "I put some hard work in in the last couple of months and it's nice to see that pay off.

"I can't reiterate enough, the guys here, kicking it off with the team time trial and the way they've ridden the last couple of days, it's truly amazing to sit behind these guys and see what they're able to do. It was my way of repaying them with the stage win and the GC."