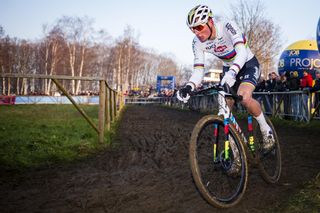 Wout van Aert (Jumbo-Visma) continued his return to action with an encouraging 4th place finish. In only his second competitive outing since crashing heavily at the Tour de France in July, the Belgian began strongly and remained in contention for a podium spot after Van der Poel escaped at the midway point.

Van Aert dropped back under the force of a Vanthourenhout acceleration on the penultimate lap, but he still had the wherewithal to place 4th, 42 seconds down on Van der Poel. His next race will be the Belgian Championships next weekend.

The day, like so many, belonged to Van der Poel, who was content to allow his rivals force the pace on the opening laps before he took up the reins and moved clear on the fifth circuit. In the opening phase of the race, Van Aert was to the fore, and his repeated forcing helped to shape the race.

By the halfway point, only four men – Van Aert, Van der Poel, Vanthourenhout and Van Kessel – were left at the front, and Vanthourenhout felt sufficiently emboldened to try an acceleration of his own.

Van der Poel’s response was swift and emphatic. The world champion quickly moved into a lead of almost half a minute and he was able to manage his advantage thereafter to secure a resounding win.

Van der Poel’s dominance has led to concerns about the ongoing appeal of the cyclo-cross circuit, but there were large crowds on hand in Gullegem on Saturday afternoon, thanks in no small part to Van Aert’s presence.

“The last five or six races prove that cyclo-cross is absolutely not dead,” Van der Poel said, according to Sporza. “It was already busy here last year, and this year it’s been one of the busiest crosses of the season. That is of course also because Wout is back, and he has done well here.”

Van Aert struggled with his equipment at one point but, he managed to catch back up to the chasers Vanthourenhout and Van Kessel, though their pursuit was a notional one by that juncture. In truth, they were already racing for second place.

Vanthourenhout’s late acceleration shed Van Aert from the group and the Belgian proceeded to beat Van Kessel in the duel for second place.