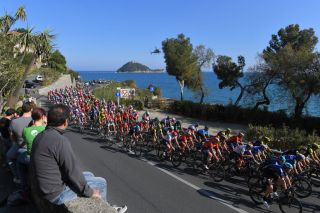 The top men and women's WorldTour teams are set to compete in a virtual 'Tour for All' points race on Zwift next week, with the competitions to be broadcast live on Eurosport and Global Cycling Network (GCN).

The men and women will compete in separate races, with women competing before the men and the television broadcast divided equally.

The professional racing series also kicks off a month-long drive to raise funds for the Doctors Without Borders (Médecins Sans Frontières) COVID-19 crisis fund. Once 250,000 Zwift users complete one stage of Tour for All, Zwift will donate $125,000 to the fund.

"Over the past few months, we've delivered a huge number of unique experiences and opportunities to ride with the stars of the World Tour peloton. I know many have been keen to see when Zwift will bring World Tour teams together to race, and I can't think of a better way to deliver this series of Men's and Women's exhibition racing than to kick off our charity month, Tour for All in support of Doctors Without Borders/Médecins Sans Frontières (MSF)."

The pro event adds a new level of competition not seen in the Digital Swiss 5, where there was no drafting advantage and each stage was a competition of pure power. The Tour for All will require more strategy, with the overall winning team being decided on points for placing on each race and points awarded on intermediate sprints. The 'queen stage' which finishes atop the Alpe du Zwift, is worth double points.

The Zwift platform's power-up bonuses add another level of strategy, with riders able to use the bonuses to temporarily gain an aerodynamic, weight or drafting boost or become un-draftable or invisible for sneak attacks.

Racing kicks off with a relatively flat stage 1 on Zwift's simulation of the Innsbruck world championship course. Riders will compete over 52.9km with only 72m of elevation gain with intermediate sprints on each of the six laps with points (5,4,3,2,1) for the top five places. The final sprint for the stage is worth 25 points to 25 places.

Stage 2 will be five laps on the Richmond world championships course for 46.2km with KOM sprints on the course's two climbs (Libby Hill and 23rd street) down to three places.

The third stage sees the first major mountain competition with a 72.9km course on Watopia with 981m of climbing with one intermediate sprint and KOM points on Watopia Hill and the Volcano for the top five places and finishing on the 'Epic' KOM with points for the top 25.

The penultimate stage will be a mostly flat Watopia circuit 42.6km in length with 147m of climbing with two KOM point sprints, followed by the queen stage - a 46.5km route on Watopia with a massive 1710m of climbing to the Alpe du Zwift. The route includes three KOM sprints - Titan's Grove, the Epic and the final climb worth 35 points for the winner.