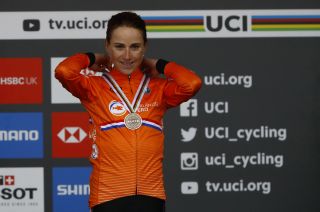 Chloe Dygert Owen (United States) put in one of the most stunning individual performances in recent years to win the elite women’s time trial at the UCI Road World Championships, and with it, end Annemiek van Vleuten's hopes of winning a third consecutive title.

The defending champion could only manage third over the undulating 30.3km course, with her compatriot Anna van der Breggen slotting into second. However, the Dutch pair were never truly in contention for the win, with Van der Breggen finishing 1:32 down and van Vleuten a colossal 1:52 off the pace.

"There’s disappointment. Especially because I put all my effort into having an awesome day here, but I didn’t have an awesome day,” Van Vleuten told the press as she made her way through the mixed zone, ironically just a few minutes after Dygert Owen had made the same path.

The Dutch rider took defeat on the chin, but this was only her second loss against the clock in more than two years of individual time trialing.

“I had an off-day," Van Vleuten said. "She had an awesome performance, and I underperformed today.”

Ever the champion, Van Vleuten praised Dygert Owen’s ride, although she admitted her performance had been well below her expectations. When asked if the wet conditions and the delayed start had played a part in her time trial downfall, Van Vlueten responded: “Everyone had it the same. Like I said, I’m not a girl for excuses. It was honest. For everyone it was rain, and Chloe Dygert today showed that she was by far the best.”

The fact is that Van Vleuten consistently lost time throughout the race. On the flat early sectors, she conceded ground to Dygert with almost every pedal stroke, and though she aimed to wrestle control over the second phase of hills,  the 36-year-old lost time there too. This was as comprehensive a defeat as she has endured in several years.

“I don’t know,” she replied when asked where this defeat came from.

"I’m not a girl of excuses. I don’t know. I’m actually surprised. This is the first time that I’ve worked so hard for something and I’ve not… Usually, I’m really good at something and being at a super good level, but today I wasn’t. I did everything the same and nothing changed but I didn’t have it.

“I started okay and I started with confidence. I wasn’t nervous, or I wasn’t more nervous, and then already on the flat parts, I knew that I wasn’t having an awesome today. I thought that the next part would be more for me, but then on the climbs, I didn’t have the power and my legs were exploding. You could see from the style I had on my bike. I was rocking. I didn’t give up and that you could see on the television. I tried hard.”

Van Vleuten came through the intermediate time check at 14.2km more than a minute down on the motoring American but in second place. However, by the time she crossed the line in Harrogate even Van der Breggen had usurped her.

When asked if the two-minute gap to Dygert Owen would be closeable with the Olympic Games in 2020 on the horizon, the Mitchelton-Scott rider was quick and categorical in her response.

“Yes. The gap is big, but if I look at my power output and compare it what I did at the national championships, it’s massively lower.  I think she’s [dominating], but we need to be on the top of our game to be close to her.

Luckily for Van Vleuten, there is little time to dwell on defeat. The women's elite road race is just days away, and it offers the Dutch squad the chance to once again establish their dominance after today’s slip. That said, Van Vleuten added that her power data from today’s race was a slight concern.

“It’s a little bit but there’s also nothing that I can change on that. Hopefully, it’s just one off-day. I’ve prepared so well for this, and until last week I had such awesome power.”

Later, in the rider press conference, Dygert Owen spoke about her inexperience when it came to road racing in Europe, and Van Vleuten was quick to joke about not letting the young American get too far ahead in Saturday’s road race. Come race day, the idea of letting Dygert Owan go up the road will be no laughing matter.