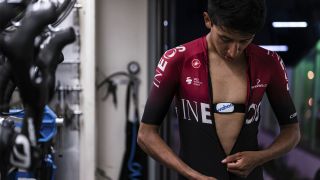 Wahoo has released an update to its Tickr and Tickr X range of heart rate monitors, with the new design improving on existing models to add some useful new features.

The original Tickr is rated highly by the Cyclingnews tech team, so with the claimed improvements, we expect the new model to be even more popular with riders.

The monitor itself pops into the chest band like the previous model, but is now more integrated and forms a flat panel to sit flusher against the body. The unit itself has also been slimmed to 12.01mm for increased comfort under close-fitting clothing. Weight has been cut down as well, with the pod and strap coming in at a claimed 48g. The module's display lights have also moved from the front to the top to make it even easier to check that the Tickr is connected and recording.

Despite all the slenderising, Wahoo has managed to increase the Tickr and Tickr X's power and functionality. Battery life has been improved by nearly 50 per cent, which gives a claimed 500 hours of use on a single battery. For ease of use, the Tickr range can remember three devices, which is handy if you have multiple hobbies or recording methods.

The Tickr X includes additional functionality, with 50 hours of onboard memory for a device-free experience and accelerometers to track body movements. Wahoo has been able to use these sensors to track the body's movements during exercise to bring further analytical data. For cyclists who ride indoors, the Tickr X can also be used to measure cadence when paired with the Wahoo app.

Wahoo is offering a range of colourways, from the on-brand blue and white to a new stealth colourway. The new Tickr Stealth variant will also be available as a part of the Elemnt Roam and Elemnt Bolt Stealth Edition bundles.