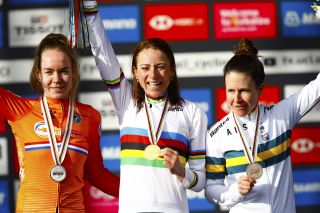 The trio of Basque races starts with the second edition of the Emakumeen Nafarroako Klasikoa on Thursday, marking the second beginning of the 2020 road season for the women's peloton after the coronavirus pandemic brought racing to a halt in March.

The 118.3km race, won last year by Moolman-Pasio (CCC-Liv) favours the climbers with two category 1 ascents in the first half of the race and two second category climbs in the last 40km, the second of which crests 10km from the line.

The South African has demonstrated fine form racing in the virtual world, taking out the penultimate stage of the Virtual Tour de France on a simulation of the Mont Ventoux this weekend.

On Friday, riders take on the flatter Clasica Femenina Navarra in Pamplona, a 122.9km route with six shorter climbs including the sharp ascent of El Perdón 20km from the finish.

Riders then leave Pamplona and head northeast for Sunday's Durango-Durango, another one for the climbers with a category 2 ascent only 6km from the line.

"I really love racing in the Basque Country it is one of my favourite places to race," Annemiek van Vleuten said. "They are hard parcours and they will be hard races. It is great they have organised three races in the area, it makes it worth the travel, and I think it will be really good to have three races in my legs as it is such a long time ago since we had a race stress."

After an unprecedented nearly five-month absence from competition, the women's peloton is itching to get back to work and the three races will provide important preparation for the first Women's WorldTour race, Strade Bianche, next month.

"It has been uncertain for a long time, but it is great that we can really start racing again," says CCC-Liv sports director Jeroen Blijlevens. Vos, a four-time winner in Durango, and Moolman-Pasio will have support from Sabrina Stultiens, who was third in Durango-Durango two years ago.

"Everyone at CCC-Liv will be extremely motivated. It's a short season, meaning that you only have a limited number of opportunities to show yourself," Blijlevens said. "The sooner you are in the right pace, the better. We hope to immediately show in competition that we have a strong team."

Canyon-SRAM will have ten riders at their disposal for the three races. For the Emakumeen Nafarroako Klasikoa, Hannah Barnes, Elena Cecchini, Ella Harris, Hannah Ludwig and Omer Shapira will support Alena Amialiusik.

For the sprint-friendly Clasica Navarra, Barnes and Cecchini will have Tanja Erath, Rotem Gafinovitz, Lisa Klein and Christa Riffel at their side.

Amialiusik will lead the team on Sunday with Erath, Harris, Klein, Ludwig and Shapira.

"I am feeling a little nervous, quite excited and very happy ahead of my first race of the 2020 season," Amialiusik said. "I've had periods without racing before, usually due to recovering with broken bones from crashes. These last months, when you're fit and healthy but unable to race, have been a very different experience. I really feel hungry for racing."

"I am expecting the peloton to be aggressive and active from the start of every race. All of us have had a long time for preparation and when everyone wants to show off what they have in the tank, then I expect it will create a very high level of racing," Amialiusik said.

Riders will face extra measures to keep the race entourage safe from COVID-19, with Mitchelton-Scott drawing up its own RACESAFE protocols, limiting contact between riders and the media and fans. Spratt expressed her confidence in the protections.

"We have to take some different measures and do our part to make sure we act responsibly with COVID-19 in mind," Spratt said. "I'm confident that with the protocol RACESAFE that the team has in place we will be able to achieve this."

CCC-Liv said it was implementing all of the measures recommended by the UCI in addition to having monitored all riders and staff since the spring.