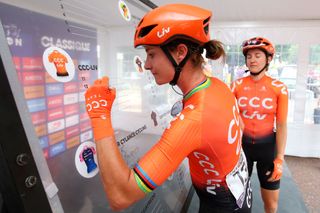 CCC-Liv have announced that they will restart the racing season with three one-day races: the Emakumeen Nafarroak Klasikoa, the Clasica Femenina Navarra and Durango-Durango, held from July 23-26 in Spain. As restrictions surrounding the COVID-19 coronavirus ease in each country, high-profile riders, such as Marianne Vos, are currently training at altitude to prepare for the late-season Women's WorldTour calendar to resume at Strade Bianche on August 1.

"Just like everyone else, we have gone through a challenging and uncertain period," said team director Jeroen Blijlevens. "In any case, when the updated calendar was presented, we were able to make careful schedules and set goals, which is important for top athletes.

"It's nice that there is now a definitive view on racing. A very busy programme awaits us, starting with some beautiful races in Spain, where we're preparing for the first big WorldTour races in August. After that run-up, stage races begin in September, while the highlights of the Classics spring season are scheduled for October," he said.

The UCI announced the revised late-season calendar in May, and although there have been three race cancellations since then, the Women's WorldTour has retained 15 of the original 22 events. It will now include four stage races and 11 one-day races between August 1 and November 8. The calendar also includes a first-ever women's Paris-Roubaix, and CCC-Liv has hired Lars Boom as performance manager, who has the goal of helping the team succeed at the inaugural event.

CCC-Liv: No reason to assume we can't survive this season

"Although the season is short and compact, our ambitions remain the same. We'll strive to be visible and perform well in each race," Blijlevens said. "Everywhere we start, we want to be of significance, but for some races, it's difficult to know what to expect.

"Take the Giro Rosa, for example: Ashleigh Moolman-Pasio and Marianne Vos are traditionally strong there, but we don't yet know the exact course. And a race like Paris-Roubaix is very specific and new for our peloton, and so it remains to be seen how it will play out. We will at least try to get the most out of it with the experience of performance manager Lars Boom."

CCC-Liv have a 15-rider roster that, along with Vos and Moolman-Pasio, is comprised of Sofia Bertizzolo, Valerie Demey, Marta Jaskulska, Jeanne Korevaar, Evy Kuijpers, Marta Lach, Riejanne Markus, Aurela Nerlo, Soraya Paladin, Pauliena Rooijakkers, Agnieszka Skalniak, Sabrina Stultiens and Inge van der Heijden. Blijlevens said he is aiming to give everyone a chance to race during the tight three-month calendar.

"At CCC-Liv, we have the luxury of having a large, high-quality group. Riders are well matched, making it challenging to complete our programme," he said. "We have determined in advance that we want to offer everyone as many opportunities as possible in the remaining races. We have also stated that we want to show our fighting spirit in each race we start.

"We have had to make choices that are sometimes not ideal for everyone," said Blijlevens. "But yes, you simply cannot enter a favourite Classic or stage race with 10 strong riders. Fortunately, everyone within the team understands the situation and the difficulties we've faced."

As public health and travel restrictions begin to ease across Europe, some of the riders are taking advantage of the next few weeks before racing begins to train at altitude. Team manager Eric van den Boom said in a press release that Vos and Paladin are currently training at altitude, while Moolman-Pasio, who has been competitive in virtual racing over the last few months, has been using an altitude tent with reduced oxygen content at her home in Girona.

"While they are in close contact with the staff, we're leaving riders to be free in their approach. We have been monitoring their health every day since March," Van den Boom said.

He also addressed the questions surrounding the coronavirus and its impact on sponsors within cycling, including their own title backer, CCC, which announced it would stop sponsorship of the men's WorldTour team at the end of this year. CCC-Liv have said that all their sponsors are up to date in their contract obligations and that the team aims to continue top-tier competition.

"The business community has been hit hard, all over the place," Van de Boom said. "The coronavirus has unfortunately also impacted our main sponsor, CCC. Every cycling fan may have heard this. We have often been asked, quite logically, what our sponsorship situation will look like next year. We want nothing more than to be concrete, but we cannot do it at the moment.

"We are looking into various scenarios and see that developments are progressing in the right direction," he said. "The starting point for all these scenarios is that we can maintain our high level of ambition in the coming years."