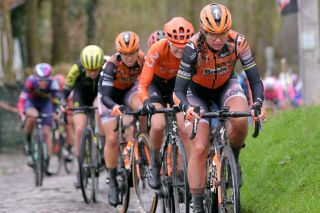 Like both Trek-Segafredo and CCC-Liv, Dutch women's team Boels Dolmans will resume their 2020 season in Spain's Basque Country with three races over four days later this month, starting with the Emakumeen Nafarroak Klasikoa (July 23), followed the next day by the Clasica Femenina Navarra and concluding with Durango-Durango on July 26.

Algemeen Dagblad reports that team manager Danny Stam and the nine-rider Dutch contingent of the team are currently on a training camp in the Limburg region of the Netherlands.

"We have just nine riders here – not the other riders from overseas yet – in Valkenburg," Stam explained to the Dutch newspaper on Wednesday. "It's great to see each other again, which hasn't been possible until now because of the coronavirus measures."

According to AD.nl, Stam and members of the team's staff will drive more than 1,300 kilometres from the Netherlands to Spain on Sunday in readiness for the three races, while the six riders who are to take part will fly down the following day.

While the team is keen to race again, Stam said that he and his riders are under no illusion about the dangers of attempting to restart competition while the coronavirus pandemic still continues.

"We are aware that things could also go wrong, and that we may have to be quarantined, for example," said Stam. "You can't rule out a 'doomsday scenario', but we need to be positive about it. I think that if everything gets cancelled now, there will be no cycling at all this season.

"What happens if a rider tests positive for corona? Does the team have to go home? Or everybody?" he asked.

"No one could foresee that it would take so long," added Stam of professional cycling's shutdown due to the COVID-19 crisis. "It's been a strange season, with a number of uncertainties.

"It's been a short year for the sponsors that we're saying good-bye to, too," he said, referring to the Dutch equipment-rental company Boels and the Dolmans Landscaping Group. "We'd like to be able to give them some nice victories."