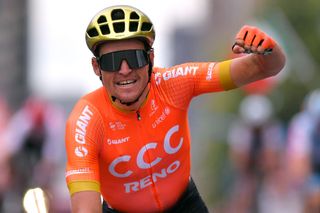 Greg Van Avermaet (CCC Team) was a man in a hurry after the Grand Prix Cycliste de Montréal. While most of the peloton will travel back to Europe aboard a charter flight on Monday evening, he had made alternative arrangements to fly home immediately after the race, mindful of how jet lag could impinge on his World Championships preparation.

After out-sprinting Diego Ulissi (UAE Team Emirates) and Ivan Garcia (Bahrain-Merida) on the uphill finale in the Parc du Mont Royal, Van Avermaet was compelled to delay his taxi ride to Trudeau Airport to fulfill the duties beholden upon the race winner. He didn’t mind the wait, not after bridging a two-and-a-half-year gap to his last win at WorldTour level.

“It’s been a year of a lot of placings, but I haven’t had a big win in a WorldTour race so I’m super happy to win on a parcours like this,” said Van Avermaet, whose most recent WorldTour success came on the Roubaix velodrome in 2017.

That victory bookended Gouden Greg’s imperial phase, which began with stage victory on the 2015 Tour de France, was crowned by an Olympic title in Rio, and also featured wins at Omloop Het Nieuwsblad, Gent-Wevelgem and E3 Harelbeke.

In the period since, the same alchemy that carried Van Avermaet to that slew of prestige victories has remained maddeningly beyond his ken, even if he has remained a redoubtably consistent performer. This year alone, his near misses include podium finishes at Omloop, E3 Harelbeke, the Clàsica San Sebastian and Friday’s Grand Prix Cycliste de Québec.

“If you’re close to the win you don’t miss that much, so I was not panicking,” Van Avermaet said. “But you know as a leader of the team, especially this team, it is always nice to have some nice victories.

“I was close in the spring, close in the Tour de France, and I was second in San Sebastian… You start to doubt, but I’ve been in great shape all year and winning is the most important.

"I finally got this one and this is important for myself and the team. I was feeling it was coming but you always have to finish it off. I was already in good shape in Quebec and the win finally came here.”

Van Avermaet made a fine cameo in the finale in Quebec on Friday, joining Peter Sagan and Julian Alaphilippe on the offensive before taking third behind Michael Matthews in the sprint.

He adopted a slightly more cautious tack on the last lap in Montreal. He did not track Alaphilippe’s searing attack on the run-in, but then outdrew all-comers with a well-timed acceleration on the drag to the line to claim his second victory on the Avenue du Parc, after winning here in 2016.

“I knew it would be a close call to stay away or to bring Alaphilippe back. Everything went well in the end,” Van Avermaet said.

“It was all stretched out with small gaps but luckily everything came back. I knew the finish was good for me and I know that after a hard race like this I still have a good sprint in the end. I could follow the wheel of Ulissi in the last 200 meters and I could come out.”

WorldTour points alone would not have sufficed to draw fields of such quality across the Atlantic these past ten Septembers. The deeper attraction lies in how the GP de Québec and GP de Montréal serve as pitch-perfect preparation for the World Championships. Indeed, race director Serge Arsenault added two laps to Sunday’s race more or less expressly to serve that purpose, and the leading group was composed largely of men who will expect to figure prominently in Yorkshire on September 29.

“The result would probably be the same [without the extra laps] but it will probably help me a little bit more to prepare for the Worlds, which will also be a really hard final in the end,” Van Avermaet said. “The race opened a bit early today, which also made is really hard in the final. I probably felt a little more tired in the end, but I was happy to have a really hard race.”

Van Avermaet was reluctant to delve too deeply into the minutiae of the make-up of the Belgian team for the Worlds, though it seems likely that national coach Rik Verbrugghe will opt for a multi-pronged approach rather than designating a lone leader, with Philippe Gilbert, Oliver Naesen and Remco Evenepoel all confirmed for Yorkshire.

“I’m just happy that I’m in shape and we will see how it will be in two weeks’ time at the World Championships,” Van Avermaet said. “I think it’s a good course for me and I’m happy with my shape, that’s the most important. We will see how the race goes and what plan we have with the Belgian team.

“I go home now, and I’ll try to get over the jetlag again, and then I’ll have two races in Belgium next weekend [Primus Haacht Classic and Gooikse Pijl – ed.]. They are good races to do, my last training will be there."