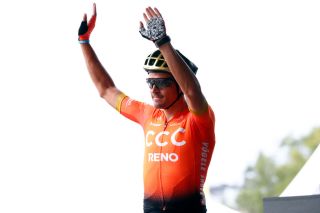 Van Avermaet raced last at the Bretagne Classic on September 1 after several weeks off the bike. He finished sixth in the French one-day race. The upcoming Canadian WorldTour races will be his last competition before the UCI Road World Championships at the end of the month.

"I always look forward to racing in Quebec and Montreal, as these are two of my biggest goals of the season," Van Avermaet said in a statement released with the CCC Team's roster announcement.

"I felt good at Bretagne Classic-Ouest France last week, and I think my legs were better than what the result suggested. I always seem to have good legs at this time of the year, and with the World Championships in Yorkshire serving as extra motivation, I have put in a solid block of training so I hope it pays off in Canada," Van Avermaet said.

"Having placed in the top 10 every time he has lined up in Quebec, including five times on the podium, Grand Prix Cycliste de Quebec is well suited to Greg’s strengths," said team director Steve Bauer. "However, this year the course in Montreal has increased to almost 220 kilometers, so the two extra laps could play in Greg’s favour with the additional kilometers causing more fatigue in the peloton, which is when Greg can dig deep and really make the difference."

Van Avermaet said the harder the racing the better it is for him in his quest for another win and also in his preparation for Yorkshire.

“Grand Prix Cycliste de Quebec and Montreal are tough races which suit my style of racing, especially as I like to sprint at the end of a long, hard race so we will be looking to make the races as hard as possible," he said. "I think we will have a good indication of how everyone is racing before the World Championships and see what needs to be done to fine-tune my form in the next couple of weeks.”

Bauer said the team will be crucial in helping Van Avermaet ascend to the podium on the challenging, punchy parcours.

"Although we have a pre-race favourite in Greg, the team will need to be on their A-game," he said. "Both races can be difficult to control, and the punchy profiles can work in the favour of a small group of strong riders going clear. Our guys are healthy, ready and motivated to get Greg back on the podium for the fourth consecutive year."