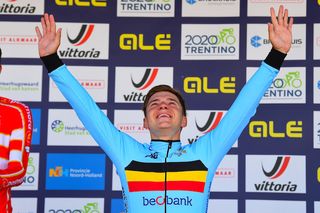 Belgium has the luxury – or potential hindrance – of arriving at the UCI Road World Championships later this month with multiple riders who have a realistic chance of victory in the elite men's road race. Greg Van Avermaet, Philippe Gilbert – road race world champion in 2012 – and perhaps even young pretender Remco Evenepoel will all fancy their chances on the long, rolling course in Yorkshire, in the UK, at the end of September.

The trio will be well supported by this year's Milan-San Remo runner-up Oliver Naesen (AG2R La Mondiale) and Tour de France stage winner Dylan Teuns (Bahrain-Merida) – both of whom could also be in with a shout of victory if the team's leaders are unable to step up.

Three more riders will be named to complete the eight-man team on September 16, according to the Belgian cycling federation.

Although Van Avermaet (CCC Team) hasn't had the best of seasons by his standards, winning only a stage at the Volta a la Comunitat Valenciana and a stage at the Tour de Yorkshire so far this year, the 284.5km road course should suit the 34-year-old Olympic road race champion down to the ground.

Veteran Gilbert, at 37 years old, would also dearly love to take a second world title to add to the one he won in Valkenburg seven years ago, and has shown decent form in the lead-up to the race, winning a stage of the Vuelta a España, where he's currently racing with Deceuninck-QuickStep.

Evenepoel, meanwhile, won the junior road race and time trial titles at last year's Worlds in Innsbruck, Austria, but will skip the under-23 category entirely to race at the elite level at this year's championships. The 19-year-old has had an exceptional debut year in the pro ranks for Deceuninck-QuickStep, winning the Clasica San Sebastian, a stage and the overall at the Baloise Belgium Tour and a stage at the Adriatica Ionica Race, as well as the European time trial championship title in the Netherlands in August, representing Belgium.

Evenepoel will again represent Belgium in the individual time trial on September 25 – alongside his Deceuninck-QuickStep teammate Yves Lampaert and World Hour Record holder Victor Campenaerts (Lotto Soudal) – before turning his attention to the road race on September 29.

"It wasn't easy to put the selection together," national coach Rik Verbrugghe said during the Belgian federation's announcement on Monday, according to Het Laatste Nieuws. "There are a lot of riders this year who have shown themselves to be ready for the World Championships.

"I've had to make some difficult decisions with my selection," Verbrugghe admitted. "The five riders that I've already called up have shown in recent months that they deserve a World Championship ticket. I'll then announce the other three names next Monday, when the competitions in Montreal and Quebec [the two Canadian one-day WorldTour events] and also the Vuelta a España are over.

"The courses in Canada are similar to the one in Yorkshire, and will give me some excellent indications [of how riders are performing]. I have already contacted the riders involved, and they know that they're eligible for the Worlds. They must now convince me that they should be selected," he said.

While Verbrugghe admitted that Belgium weren't the favourites – France's Julian Alaphilippe and Mathieu van der Poel of the Netherlands arguably top the list – he said that they were ambitious and had a strong squad.

"It's now my job to get everyone pulling in the same direction," said Verbrugghe. "It's important to make clear agreements in advance. But I'm confident that we'll succeed, and that we'll have a good Worlds."

Of Evenepoel's selection at such a tender age, Verbrugghe added that it's all about the young Belgian gaining experience for future World Championships and next year's Olympic Games.

"Everyone knows that he's something special, and it's not yet clear where his limits are. A course of over 280 kilometres will be tough for such a young rider, but we want him to get a taste of what the Worlds are like. But there's certainly no pressure on him."

Cyclingnews joined Verbrugghe, Naesen and Lampaert when they did a reconnaissance ride of the Worlds course in early June. Their thoughts on the route can be found in the video below.