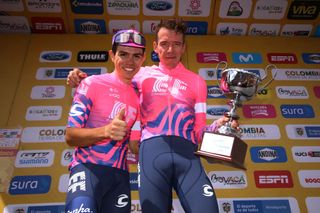 The pair enjoyed Grand Tour success in 2019, with Urán taking seventh at the Tour before sustaining brutal injuries after crashing out of the Vuelta a España, while Higuita won stage 18 at the Vuelta, which was his debut Grand Tour.

Urán's injuries included a fractured shoulder blade, several ribs and a collarbone, as well as a punctured lung. The 33-year-old returned to racing at February's Tour Colombia 2.1, helping the team to a podium sweep led by Higuita.

"For me, Urán remains the best Grand Tour rider in our team," Schep told Dutch podcast De Grote Plaat. "His professional seriousness is really outstanding. We hope that Sergio Higuita will be able to work on this because he has shown with his Vuelta stage victory that he has it in him."

Urán on road to recovery following Vuelta a España crash

Meanwhile, 25-year-old Hugh Carthy made big steps last season with his Giro d'Italia including a day in white en route to 11th overall, as well as the overall win at the Tour du Var and a long-range solo stage win at the Tour de Suisse.

"Hugh got a lot of morale from last season," said Schep. "The queen stage in the Tour de Suisse was one of his most beautiful days. You can imagine that if he goes with the Colombians to the Tour that his role will be very different from his role at the Giro."

Schep also gave an update on the condition another of the team's leading climbers, Michael Woods. The Canadian crashed out of Paris-Nice with a broken femur but is well on the road to recovery and has begun training again.

"Woods is already training at the right level again. He started in athletics and I have the feeling that he isn't afraid of a rather fierce rehabilitation. When I see him engaged, I think he's doing it with a very fresh mindset."

In addition to Higuita and Carthy, the American team has a number of other promising talents on the roster, including Neilson Powless, Dani Martínez and Stefan Bissegger, due to join in August.

EF look set to lose one of their youngsters, though, with the recent announcement that Mexican rider Luis Villalobos had tested positive for growth hormone GHRP-6 last year, before his August transfer to the team.

The news, which came over a year after he provided the sample in an out-of-competition test, has led to EF suspending him indefinitely.

"The same year [as the positive test], he came to our team," said Schep. "Our dissatisfaction is how it's possible that the UCI came up with something a year and a half later while the rider is signed with us.

"We have to meet strict requirements, where everyone here is happy with the arrangement. Everyone follows it correctly, so you have to invest real money to work preventatively against such cases. And then a year and a half later they come with the message that this rider was positive. It's really crazy."