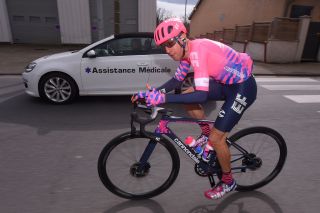 Michael Woods (EF Pro Cycling) suffered a broken femur in a crash during stage 5 at Paris-Nice on Thursday. The Canadian was transported to a hospital in Lyon, France, and will undergo surgery to correct the fracture, according to a team press statement.

"He was taken to a Lyon, France, hospital immediately, where evaluations confirmed he suffered a closed fracture to his right femur," read the press statement. "He will undergo surgery this evening in Lyon to repair the injury. Woods will return home to Girona, Spain post surgery."

Woods crashed during the 227km race between Gannat and La Côte-Saint-André, won by Niccolo Bonifazio.

The crashed happened inside 45km to go, and although television pictures didn't show how the crash happened, it later showed the rider laying on the ground at the side of the road as he appeared to be in pain. He was awake and able to communicate with the medics, but he was pointing to his right leg or hip.

"We feel for Mike and his friends and family," said the team’s head of Medicine, Kevin Sprouse. "We’ll work with Mike every inch of the way as he recovers from this injury."

EF Pro Cycling also lost American Lawson Craddock, who was forced to abandon Paris-Nice as well on Thursday, as he was suffering from a headache, according to the team press release.

"Per ASO protocols due to concerns around the COVID-19 virus, he was taken to the finish in an ambulance. The team’s doctor was in Lyon with Woods, but ASO medical officials determined Craddock did not meet the criteria to be tested for the coronavirus."

Craddock will return to his European base of Girona, Spain, on Friday.

Tejay van Garderen has also left the race after not starting stage 5 in Gannat. The American decided to travel home early before a coronavirus travel ban imposed by President Donald Trump begins.