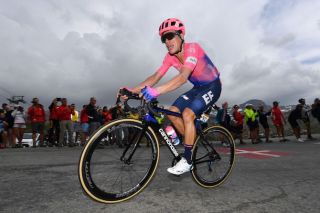 EF Education First's Rigoberto Urán is hoping to be able to return home to Colombia for the off-season by the end of October, having now finally left hospital following his crash at the Vuelta a España at the end of August.

The 32-year-old Colombian said after the crash that he felt "lucky to be alive", suffering a fractured shoulder blade and collarbone, several broken ribs and a punctured lung, with the latter keeping him in hospital for 20 days.

"I have received so much support from everyone," Urán said on the EF Education First website. "From friends, family, my followers... It really showed me just how much everyone cares; it was really beautiful.

"People taking the time to write messages to me... It was such an amazing flow of good energy. This kind of thing really helps me a lot. It gives you so much motivation when you're trying to recover," he said.

'It's been a tough few weeks'

Urán said that he's still waiting for the all-clear from his doctors to be able to embark on a long-haul flight, but for now is back at his European home in Monaco, with a return to Barcelona necessary as he continues to recover.

"It's been a tough few weeks. Some of the most difficult, with all the pain and the complications and spending so much time in hospital," he said. "But not just that – it's also been really difficult for my family, for them to have to see me like I was.

"But everything's good. I'm slowly getting better," said Urán. "I'm in Monaco at the moment, but I will have to return to Barcelona at the beginning of October, around the 10th, for an examination with my surgeon, Dr Mir. I'll have to have another x-ray to see how everything is healing and if there will need to be another operation.

"After I have the examination with the doctors in Barcelona, I'll know more about when I can head back [to Colombia]. At the moment, I'm not able to take a long-haul flight while everything is still recovering, which makes everything a little more complicated," he said.

Urán also crashed out of French stage race Paris-Nice in March, breaking his collarbone, which also required surgery, but retruned to racing to finish seventh at the Tour de France in July. Before crashing out at the Vuelta, Uran had been in sixth place overall at the Spanish Grand Tour.

'It was a big operation'

"They took out the previous plate on his [left] collarbone and replaced it with another one that runs nearly the entire length of the collarbone," Dr Morgan explained. "There is now also a metal plate on the left scapula to try to stabilise the shoulder and allow it to heal. The scars are looking good, though, and are also healing well. But it will take time; we have to remember the surgery took six hours. It was a big operation.

"But Rigo is doing really well," he continued. "His pain is controlled and he's doing regular physiotherapy. He's doing what we call passive and active physiotherapy with a therapist, and then on his own at home.

"The main focus is working on returning a full range of motion to the shoulder and then working on his strength. There is certainly no hurry in getting him back on a bike, especially at this time of year, but we're not worried that he won't make a full recovery."