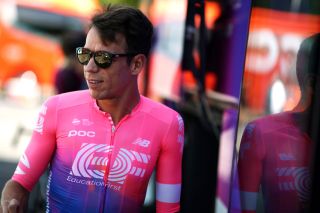 Twelve days after crashing out of the Vuelta a España, Rigoberto Urán (EF Education First) has given an update on his condition from his hospital bed. The Colombian suffered multiple injuries in the mass-pileup on stage 6, and has since remained in a Barcelona hospital.

Urán noted that he had recently undergone seven hours of surgery and was "lucky to be alive" after suffering a fractured shoulder blade, several broken ribs and a punctured left lung, as well a fractured left collarbone. His lung injuries delayed the surgery on his shoulder and forced him to stay in hospital.

"After seven hours of surgery, the doctor tells my family that the puzzle is now complete, as it was also a big shock for them.

"My collarbone, shoulder blade, ribs and vertebrae are fine, and the lung is getting better. Now patience is needed to get out of here and recover."

It's not the first time that the 32-year-old has been in hospital this season, having undergone surgery on a broken left collarbone after crashing out of Paris-Nice during the crosswind-hit second stage.

"This year has been difficult," he said. "Thanks to everyone for their well-wishes, because according to the doctor I'm lucky to be alive."

Urán, who finished seventh at the Tour de France and lay sixth overall at the Vuelta before his crash, should return to racing next season.