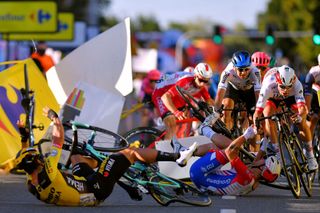 The aftermath of the mass crash on stage 1 of the Tour de Pologne (Image credit: Getty Images)

The UCI has announced it will reinforce race inspections for the rest of the rescheduled 2020 season and initiate a major reform of race safety conditions after a spate of major crashes saw riders protest about their safety.

Fabio Jakobsen (Deceuninck-QuickStep) was put into an induced coma after crashing through the barriers when he was squezed at high speed by Dylan Groenewegen at the Tour de Pologne, teammate Remco Evenepoel fractured his pelvis after crashing over a low wall on a difficult descent at Il Lombardia, and a car took out in Max Schachmann in the final kilometres of the race, leaving the Bora-Hansgrohe rider with a fractured collarbone.

A number of riders also crashed hard on a gravel-covered descent at the Critérium du Dauphiné – with Jumbo-Visma's Steven Kruijswijk subsequently forced out of the Tour de France due to his injuries – and again on poor-quality roads at the Tour de Wallonie.

Riders criticised the UCI, race organisers, and even their own CPA riders association after the crashes. Some accepted they are often responsible for crashes but believe more can be done to reduce the risks of racing. Jumbo-Visma veteran Jos van Emden put forward 10 proposals in the hope of making things safer.

Van Emden makes 10 rider-safety proposals: We are not circus animals

The UCI pointed the finger at race organisers for the recent incidents, suggesting they had not respected the safety regulations.

"Even though risks are part of our sport, the UCI cannot tolerate the fact that the accidents over the last weeks have often been the result of non-respect of the safety regulations that apply to all players of professional road cycling," the UCI said in a statement announcing the reinforcement of race inspections and a wider review.

"Too many serious crashes have occurred recently, and the UCI is aware of the dissatisfaction from the riders, with the CPA regularly speaking on their behalf.

"As safety remains the responsibility of the organisers, the UCI immediately took measures laid down in the regulations after the events that occurred, notably, at the Tour de Pologne, Il Lombardia, Critérium du Dauphiné and the Tour de Wallonie. Our Federation continues its investigations and cannot rule out the possibility of implementing disciplinary procedures.

"We note that certain fundamental safety measures are not respected even though new measures with the aim of improving rider safety at races were introduced at the UCI Management Committee meeting in January 2020 at the request of riders and in agreement with all parties – riders (CPA), organisers (AIOCC) and teams (AIGCP). Therefore, until the end of the season, the UCI will further reinforce its inspections before and during events, together with its Technical Advisers, with the aim of guaranteeing as far as possible the utmost safety of athletes."

The UCI also said it would initiate a "far-reaching reform of the safety conditions" in conjunction with the riders, teams and organisers.

Details and a timeline of the reforms were scant but the UCI said the aim was to "make an objective and shared assessment of the current situation, marked by the repetition of crashes endangering all riders, and introduce improvements which – in some cases – will be able to make use of new technologies."

A reinforced system of sanctions could also be considered in the case of non-respect of the regulations, with the UCI highlighting the safety measures it has introduced in recent years.

"The safety of riders is a priority for the Union Cycliste Internationale which considers this issue of the greatest importance. We are aware of the riders' concerns over safety conditions as they go about their work and we are determined to take further steps to provide a strong and appropriate response," UCI president David Lapparitent said in the press release.

"We extend our wishes for a quick recovery to all riders affected by the accidents, and we assure them, as well as the entire peloton, that the UCI, over and above the measures already undertaken at the beginning of the year, is working on new initiatives together with cycling's players, to guarantee greater safety for all."