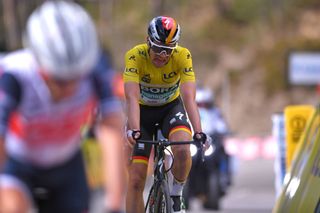 Maximilian Schachmann has called on the CPA and race organisers to improve  safety after he was knocked from his bike by a wayward driver in Il Lombardia. The German was hit after a non-race vehicle that had inexplicably managed to infiltrate the race route. The Bora-Hansgrohe rider managed to remount and finish seventh in the race, and while he may not require surgery, his season is at risk after he was diagnosed with a broken collarbone.

It could have been a lot worse given the speed at which he was travelling when the driver of the car veered into him, but the Paris-Nice winner wants his experience to act as a catalyst for change. In the 48 hours after the incident, however, Schachmann told Cyclingnews that neither race organisers RCS, nor the CPA or UCI, had contacted him.

"I can check my emails again, but so far I haven't heard anything from the UCI, RCS or CPA. I saw one tweet from the UCI saying that they wished me a speedy recovery, but that's it," he told Cyclingnews.

"On the one hand, I'm quite happy after the crash because I'm already on the home trainer, but at the same time it's sad that after three months of training through the coronavirus, I've been stopped by a car, and it's not my fault. It's really shit."

Driver who cut off Schachmann during Il Lombardia fined

It's not clear whether Schachmann will pursue any legal action against any of the parties involved. The driver of the car has been fined by the Italian police, while the UCI are investigating RCS.

"I don't know yet. It's difficult," said Schachmann. "I don't want to become a rich man because of this. I just want to have safer races. I want to do my sport and focus on that, rather than think about taking action against RCS. I don't know what I'm going to do yet, but that's why I'm talking to you, because something needs to change in cycling."

Schachmann had just made it down the final descent in Lombardia when the private car turned onto the course. The German initially thought that the vehicle was related to the race, and when he saw the owner veer right, he believed that the coast was clear. Unfortunately the driver – who has since been fined and docked points – immediately drove left into Schachmann's path.

"It was a special Lombardia: it was super hard, and everyone was racing on their own. There were no groups. I was quite surprised to find that I was doing my own racing without any police motorcycle, but you're in race mode at that point, and my main focus was on catching Vincenzo Nibali [Trek-Segafredo]," recalled Schachmann.

"I remember coming around the corner and seeing the black BMW. I was confused at first because I wasn't sure if it was a race or a private vehicle, but there's no time to really think about it because I was maybe doing 80kph. The camera motorbike hit their horn and then the car moved to the right and slowed down. I thought I could go on the left because the driver had finally understood that they'd driven into a bike race, but suddenly the driver accelerated to the left and I had no chance.

"I just couldn't understand how such a thing could happen. I wasn't 20 minutes behind the leader in 150th place – I was going for a top 10 in one of the biggest races on the calendar. What would have happened if the car had gone up the descent and hit me? I could have died. There was a big lack of security."

A need for change

Schachmann's specific example might stand out as being rare, but there have been a series of safety concerns in recent weeks.

At the Tour de Pologne, riders finished stage 1 with a downhill 80kph sprint. Dylan Groenewegen took Deceuninck-QuickStep's Fabio Jakobsen into the barriers, and although the Jumbo-Visma rider took responsibility for the crash, the organisers went out of their way to insist that the finish was safe – a call that angered many riders.

At the Critérium du Dauphiné, race organisers faced an understandable backlash after a badly surfaced descent on stage 4 saw Emmanuel Buchmann (Bora-Hansgrohe) and Steven Kruijswijk (Jumbo-Visma) crash out. Both Thibaut Pinot (Groupama-FDJ and Kruisjwijk's teammate Tom Dumoulin criticised the organisers for including a steep descent that included gravel and potholes.

Then, at the same race as Schachmann was knocked off, Remco Evenepoel (Deceunink-QuickStep) crashed and plunged down a ravine. He was left with a fractured pelvis and his Giro d'Italia debut in tatters. What made his fall all the worse was that it came on a descent that has a notorious reputation as being dangerous.

"Remco's crash was bad, too, and it wasn't his fault either," Schachmann told Cyclingnews. "We can't see all the descents, so we have to trust the UCI, the CPA and the race organisers that we have safe roads. It's similar to what happened in Poland. We had the crash on stage 1, but then on the mountain stage that Remco won, the descent was so dangerous, so bumpy, so steep and on tiny roads. If the conditions had been wet, it would have been a disaster in my opinion."

The CPA have made statements surrounding the incidents in Lombardia and the Dauphiné, but riders, including Schachmann, are puzzled by how little progress has been made. The Bora rider even pondered what the CPA actually do.

"I don't think that they're doing enough. Honestly, I'm not sure what they do. The descent on which Remco crashed, Laurens De Plus and Jan Bakelants crashed on three years ago, too. But still there's no sign, no marking or marshal. Why don't they invest more in safety at races? They could have installed nets, but they didn't. Then when it comes to stage races, they need a group of ex-pros who look at the whole parcours and 'proof' them," he stated.

"For my situation, the organisers need to make sure that the race parcours is closed and that the riders are safe. The most efficient way of doing that is by having the right amount of motorbikes on the course."

At the Dauphiné, the controversial descent on stage 4 lead to riders neutralising a downhill section at the start of the following stage. One option for members of the peloton would be to strike and stop races on the road, and demand greater action from the governing bodies and organisers. For Schachmann, striking should be the last resort, but he is clear that solidarity between riders is paramount over the issues of safety.

"I wanted to take this chance to support riders like Dumoulin. He's also opened his mouth after the Dauphiné stage. All the riders should support each other at the moment because it could achieve something," continued Schachmann.

"I don't want to damage the sport. I think that it's in the interest of everyone to make racing safer because people at home don't enjoy watching races in which riders are almost dying. Fans like to see battles, and riders suffering in the mountains, but they don't want to see a sprinter's face look different after a crash or Remco going down a bridge. The CPA and the organisers have seen what's happened over the last few weeks. How could they not make changes? Striking could hurt the sport, but if nothing changes, then maybe it's one of the last resorts."

On a personal level, Schachmann is still waiting on more tests before a decision is made about his future. Should surgery be required, then his debut at the Tour de France will have to be shelved for another year. There's a chance that the collarbone could heal on its own, but there are no guarantees. For a rider who started the season in such fine form, it's a cruel position to be left in.

"It's too early say about the Tour. I broke my collarbone less than 48 hours ago. Of course, I'm in pain, but everything around the break has been damaged. I can feel everything, so it's too hard to say if I can race the Tour," Schachmann said. "If I do, it will be with a broken collarbone."