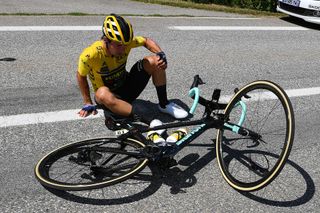 Primoz Roglic gets up after his crash while leading GC in Critérium du Dauphiné (Image credit: Getty Images)

Since the men's WorldTeams and ProTeams resumed racing in the last week of July, at least 20 riders have been struck with injuries, many of them the result of crashes in a fraught return to racing after the coronavirus pandemic postponed the early season.

Thibaut Pinot (Groupama-FDJ) is the latest rider to announce time off the bike. He will skip the French national championships road race on Sunday due to back pain after crashing during stage 4 of the Critérium du Dauphiné.

Jumbo-Visma have the most riders injured with Steven Kruijswijk suffering a dislocated shoulder and Primož Roglič banged up badly in crashes during the Dauphiné.

The team had already lost Gijs Leemreize to a severed finger in the Vuelta a Burgos, while Dylan Groenewegen was out with a fractured collarbone, and an internal suspension after causing a crash that grievously injured Fabio Jakobsen (Deceuninck-QuickStep). Mike Teunissen has been out with a knee injury since crashing in training in July.

The injuries came as Jumbo-Visma enjoyed ample success in the race, winning three of the five stages with Wout van Aert, Roglič and Sepp Kuss, and leading every day until Roglič abandoned before the start of the final stage.

Deceuninck-QuickStep have arguably been hit by the worst crashes: Remco Evenepoel crashed into the ravine on the descent of Muro di Sormano in Il Lombardia on Saturday and suffered a fractured pelvis and lung injury, while Jakobsen is facing a long rehabilitation of serious injuries to his jaw and facial muscles from the crash in Poland. The team are also missing Yves Lampaert, who crashed in Milano-Torino and broke his collarbone.

Bora-Hansgrohe have also been hit hard, with German champion Maximilian Schachmann suffering a broken collarbone after a driver got onto the course in the final kilometres of Il Lombardia and cut him off. Emanuel Buchmann and Gregor Mühlberger crashed out of the Dauphiné but escaped fractures.

Crashes at the Critérium du Dauphiné were responsible for roughly half of the injuries to riders since racing resumed, and riders threatened to protest the road conditions on the final stage. Jumbo-Visma called the road surface on stage 4's Col de Plan Bois "a disgrace," saying that big potholes and gravel led to Kruijswijk's crash.

Jumbo-Visma manager Richard Plugge said he and other team directors no longer have confidence in the UCI to ensure a race meets safety conditions and called for an independent group to be involved in assessing courses.

Jakobsen's crash also sparked criticism of Tour de Pologne race organisers for using the fast, downhill stretch in Katowice in the opening stage and for employing barricades that came apart and flew into the course upon impact, where several riders were injured: Marc Sarreau (Groupama-FDJ), Damien Touzé (Cofidis) and Eduard Prades (Movistar).

Il Lombardia organisers RCS Sport are facing an investigation by the UCI into why a driver was on the course at the end of the Saturday's stage but there are also questions over the steep and technical descent of the Sormano. Evenepoel wasn't the first rider to fall into the ravine on the descent - in 2017 four riders were injured after crashing over the low walls into the ravine in a different spot. Deceuninck-Quickstep manager Patrick Lefevere questioned if the Sormano should even have been used after seeing Evenepoel's crash.

According to Procyclingstats.com, the average number of injuries for August in a typical racing year is 23. The month is only half over and already 15 riders have suffered fractures or serious injury in 35 days of racing, with at least 10 more with minor injuries from crashes.

Other riders like Nairo Quintana (Arkéa-Samsic) and Egan Bernal (Ineos) abandoned the Dauphiné with injuries unrelated to crashes: Quintana's knee, injured when he was struck by a driver in Colombia, was bothering him while Bernal had pain from an old back injury.

Before the pandemic halted racing, there were 26 riders with fractures or serious injuries in 61 days of racing, with EF Pro Cycling's Michael Woods (fractured femur) and Trek-Segafredo's Matteo Moschetti (dislocated femur, hip fracture) among the worst cases. Both are back to racing.