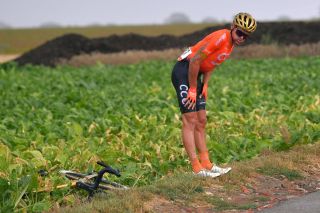 After serious incidents at the Tour de Pologne, Critérium du Dauphiné, and Il Lombardia, rider safety is a major topic in the sport and there was more cause for concern on Monday at the Tour de Wallonie.

Several riders publicly complained in the aftermath of stage 2 in Belgium, on a day in which Greg Van Avermaet crashed and broke his bike due to a pothole.

The Deceuninck-QuickStep riders were the most vocal on social media, with four of their seven riders highlighting dangerous conditions on the 172km stage from Frasnes-Lez-Anvaing to Wavre.

The main area of concern was poor road surfacing, while road-side bollards in the final kilometres were also pointed out.

"Today there was one point in particular. It was this unbelievable road, full of holes, a road you could hardly ride a bike on. Lots of guys crashed and some broke their material, so it was clearly not a normal road to race bikes on," Michael Morkov told Cyclingnews.

"The finishing straight was also incredibly dangerous. They just put barriers in the final 300-500 metres, so when you come from the open road you can fly straight into them. There were also poles early on with signs saying ‘no parking’, that were put there today. We were coming and on the left and there were guys passing in and out of the poles."

Morkov said there were no plans for a rider protest on the Tour de Wallonie's remaining stages, nor was there any talk of raising the matter to the UCI or the CPA riders' association.

Nevertheless, many others joined the Dane in expressing their displeasure.

"Red card today for the organization of the Tour de Wallonie," his teammate Florian Sénéchal, who placed fifth on the stage, wrote on Twitter.

"Circuit much too dangerous for a sprint finish, road in bad condition, too many traps on the side of the road. Always reacted when there is a death or serious injury. making it safe for riders is not a priority?"

Team Ineos' Luke Rowe responded: "Amen to that! What a shit course today!!!"

Iljo Keisse posted a picture of what appeared to be a generic photo of a road - not the race route - littered with potholes, with the caption: "Trying to avoid the pot holes in the road during today’s stage = Mission impossible!"

Michael Mørkøv added: "And for sure the UCI have no responsibility for this, like with other safety issues and crashes #greatfederationwehave."

Stijn Steels, meanwhile, highlighted the bollards that lined the road on the run-in to the finishing straight in Wavre. The peloton rode on the left-hand side and many riders had to swerve in and out in order to dodge them.

Other riders outside Deceuninck-QuickStep joined in, with Jetse Bol and Thomas De Gendt having an exchange on Twitter. "Sometimes there was asphalt between the potholes in Wallonia today!" wrote Bol before De Gendt responded: "And sometimes they fill the cracks with concrete slabs." Bol added: "There is still a lot to fill!"

The complaints follow a number of safety issues since the season re-start. On Sunday, riders at the Critérium du Dauphiné neutralised the start of the final stage in protest at a poorly surfaced descent on the previous stage, which saw the likes of Emanuel Buchmann, Steven Kruijswijk, Primož Roglič, and Thibaut Pinot suffer crashes that have hampered their Tour de France preparations.

At the Tour de Pologne, Fabio Jakobsen suffered life-threatening injuries and many more riders less severe injuries, when he crashed into barriers that collapsed on a downhill sprint that has long been seen as too dangerous.

At Il Lombardia on Saturday, Remco Evenepoel suffered a horrific crash, falling over a bridge and into a ravine on the descent of the Sormano, where several riders have crashed and suffered serious injuries in the past.

And for sure @UCI_cycling have no responsability to this, like with other safty issues and crashes 👏 #greatfederationwehave 🥇 https://t.co/leDeTXIfT8August 17, 2020

I’m a real fan of healthy food, but looking at vegetables from close range is not what I had in mind during today’s stage. Hit a big hole in the road and crashed. Happy I’m ok! #RideForMore #TRW pic.twitter.com/E2HMY9YjhNAugust 17, 2020

Glad to see more and more riders talk about the topic of safety. We need to be united and we need the teams on our back @AigcpOfficial Is everyone responsability to create a better work inviroment. We can not still make the things like they were done 40 years ago.August 17, 2020