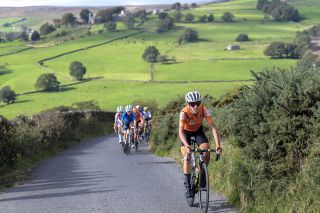 Annemiek van Vleuten takes flight from the bunch during the elite women’s road race, before soloing to the rainbow jersey at the 2019 World Championships in Yorkshire (Image credit: Bettini Photo)

UCI President David Lappartient has confirmed that the signed agreement reached between stakeholders for men's professional teams to determine salary cost-cutting measures that would help with their survival during the coronavirus pandemic has been extended to CPA Women and UNIO, which represent women's teams.

The agreement highlights a strategy for allowing fair negotiations between teams and riders to take any potential salary cost-cutting measures, such as reducing or deferring rider and staff salaries. These suggested steps and possible negotiations are aimed to help with the survival of the teams while also preserving the rights of the riders and staff.

The women's teams version of the agreement also includes an allowance for teams to use their UCI bank guarantees to pay rider salaries.

"We are in a difficult situation, so the agreement has been signed between the CPA, AIGCP, and the UCI for the men, and we extended this one and duplicated it for the women with CPA [Women riders association], UNIO [women's teams association] and with the UCI," Lappartient said in an online press conference.

Lappartient suggested that it was important to address the economic impact the coronavirus will have on team finances by first discussing potential, temporary cost-cutting measures along with fair contract negotiations with the riders and teams associations. These discussions, Lappartient said, should be held before teams and riders attempt to access the UCI bank guarantee during the pandemic crisis.

The UCI announced on April 11 that the CPA and AIGCP men’s teams association had signed an agreement to safeguard principles and processes for UCI professional men’s teams. The document was signed by Lappartient along with CPA President Gianni Bugno and AIGCP President Iwan Spekenbrink.

The agreement was announced after six men’s WorldTour teams started to negotiate reductions to riders and staff salaries in response to the COVID-19 crisis. Men's teams that also announced the use of state aid, salary reductions or deferments included CCC Team, Astana, Lotto Soudal, Bahrain McLaren and Mitchelton-Scott.

Mitchelton-Scott was the first women’s WorldTeam to announce that its riders had accepted salary reductions. World champion Annemiek van Vleuten confirmed that she has accepted a 'substantial' pay cut to help with the survival of her team, a decision made after taking into account that the team's title sponsors have been heavily impacted by the COVID-19 crisis.

While no other women’s team has announced similar cost-cutting measures yet, UNIO president Ronny Lauke told Cyclingnews that sponsors and businesses have been impacted by the pandemic and that could result in the loss of some women’s teams next year.

Bigla-Katusha’s announced that their future is in jeopardy after receiving notice that both title sponsors have withdrawn funding. The team has launched a fundraising campaign and has also requested access to the UCI bank guarantee to help secure payments to staff and riders.

The bank guarantee is a percentage of a team's overall budget that is put into a blocked account at the time of registration each season. The funds can be used by the UCI to protect the riders' rights to be paid if their team does not comply with their obligations. A team’s bank guarantee could potentially pay for up to three months of a rider's salary but is considered as a last resort.

The exceptional measures, including salary reductions discussed by the UCI, CPA Women and UNIO have a stated objective "to preserve the essential rights of riders and staff while allowing the necessary measures to be taken for the survival of the teams".

In addition, such measures are only applicable during the COVID-19 pandemic and measures will end on the first day of the month in which the UCI International Road Calendar resumes. The UCI recently published a revised Women’s WorldTour with the first race scheduled to be held on August 1.

The agreement also stipulates that the temporary framework is for discussion between the teams and their riders, and that such measures are not automatic and must have the prior agreement of all the parties involved in the contracts.

The UCI announced that an agreement had been made with CPA Women and UNIO when it published the general framework for revised Women's WorldTour.

"This agreement enables teams facing serious financial difficulties in the current context of the pandemic to take necessary measures for their survival while preserving the rights of their riders and staff. This measure had already been introduced for men’s professional cycling," read the framework.

The published agreement signed between the UCI, CPA and AIGCP for the men's teams, and extended to women's teams, is called 'Safeguard principles and process for UCI professional Teams' and includes the details of the cost-cutting measures.

A representative from UNIO confirmed that the women's teams and riders association agreement with the UCI is the same as the men's agreement, with the addition of a specific right to use the team's bank guarantee.

"At UNIO’s request, the UCI accepted an additional measure consisting of allowing women’s teams to use the bank guarantee [if a team and all riders of that team agreed to that measure] and thus to be able to pay salaries with such unblocked amounts," a representative from UNIO told Cyclingnews.

Cost-cutting measures that may be agreed upon

The 2020 season marked the launch of the new two-tiered teams system - WorldTeams and Continental Teams - whereby the top tier of eight teams had heightened financial requirements that include a minimum salary of €15,000 (employed) or €24,600 (self-employed), along with social insurances and benefits such as maternity leave.

Over the next three years, the UCI is aiming to gradually increase the number of Women's WorldTeams to 15 teams and the minimum salary requirements to equal the men's Professional Continental, which is currently set at €30,855.

Lappartient confirmed that the WorldTeam minimum salary requirement will remain in place for this year and in 2021. However, given the economic impact the coronavirus has had on businesses, sponsors and teams, the UCI will evaluate the state of both men’s and women’s teams at the end of this year.

"We launched his new reform and we were very happy, it was very positive, first step was to have eight WorldTeams and to have minimum salaries. This minimum salary [requirement] will continue grow every year and to reach, at the end, the same level as the men," Lappartient said.

"At the date of today [Tuesday], we wish to maintain the same minimum salaries as it is supposed to be for 2021 for the ladies. Of course, at the end of the year, we will evaluate both men and women; what is the current situation if we are to safeguard as many teams as possible, and this is what we want to do."