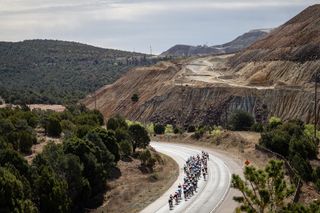 The peloton at the 2018 Tour of the Gila (Image credit: Jonathan Devich/epicimages.us)

The Tour of the Gila has become the latest race to announce its cancellation as a result of the ongoing Covid-19 coronavirus pandemic. The announcement that men's and women's races, set to begin in late April, would be called off follows that earlier on Thursday of the Volta a Catalunya's suspension.

The race, won by James Piccoli (now of Israel Start-Up Nation) in 2019, becomes the first on the America Tour to fall victim to coronavirus. Unlike RCS Sport, who are seeking a rescheduling of Strade Bianche, Tirreno-Adriatico and Milan-San Remo, Tour of the Gila organisers will not seek to run the race at a later date during the 2020 season.

Volta a Catalunya cancelled as part of ongoing coronavirus measures

"Public and participant safety is always of the most [sic] importance; thus, this hard decision had to be made."

The 2020 Tour of the Gila was set to run from April 29 to May 3 in New Mexico. The Gila Monster Gran Fondo, held on October 12, is unaffected by the move. Planning for the 2021 edition of the race will begin immediately, said Brennan.

"Special thanks is extended to all the sponsors, all of the state, county and municipal agencies, and all of the wonderful volunteers.

"I am disappointed we are not racing this year but looking forward to 2021. Plans are beginning now. We will see you in Gila 2021 and also for the Gran Fondo, Saturday, October 10, 2020."

Plans for the 2020 edition were to include 11 foreign teams across both races, including teams from France, Ecuador, Canada, Mexico and New Zealand, Brennan shared. Last year's race was a largely north and central American affair, though Óscar Sevilla (Medellín) took second overall behind Piccoli.

Brodie Chapman (Tibco-SVB) won the 2019 women's race ahead of Chloe Dygert-Owen, the then 22-year-old who went on to become world time trial champion in Yorkshire.

"There were going to be 19 professional men’s teams and 12 professional women’s teams." Brennan said. "The amateur field was looking big and strong. Overall, Tour of the Gila was staged to be one of the largest and best caliber races in its 33 years."

News of the race cancellation is the latest blow to the US racing scene, which lost both the men's and women's Tour of California after the races were put on hiatus by organisers last October.

The UCI America Tour continues with the Gran Premio de la Patagonia on March 15. The Joe Martin Stage Race, set to be run on April 2-5 in North Carolina, is the next US race on the America Tour calendar.

Over in Europe, the fate of several races in Belgium hangs in the balance with the WorldTour races Driedaagse De Panne, E3 BinckBank Classic, Gent-Wevelgem and the Dwars door Vlaanderen all likely to be called off after the Flemish regional government called a halt to sporting events until April 3.

Tour of the Gila is Canceled for 2020. For more information visit https://t.co/Iv8wbMr4yk pic.twitter.com/bjvzNI3EsQMarch 13, 2020