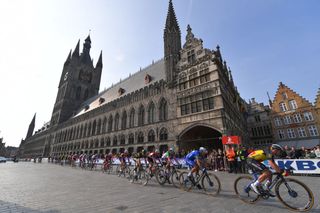 The Gent-Wevelgem men's and women's races and the E3 BinckBank Classic are among the races to be cancelled in Belgium after the Flemish regional government prohibited all sporting events up to April 3 in response to the Covid-19 coronavirus pandemic. The lone exception is professional football, which will continue behind closed doors this weekend.

It was not yet initially clear whether the decree extended to professional races, but confirmation arrived later on Thursday, when Flanders Classics CEO Tomas Van Den Springel wrote on Twitter: "We are fully aware of the need for these measures. So no Gent-Wevelgem and no Dwars door Vlaanderen.

"The uncertainty about when racing will be resumed and the potential calendar change for the Olympics make any discussion about potential new dates for our races premature."

The Tour of Flanders, also organised by the group and which takes place on April 6, is not yet affected by the announcement by the Flemish regional government, though Flanders Classics confirmed earlier on Thursday that it has postponed the sportive event that takes place that same weekend, as well as those linked to Gent-Wevelgem, Dwars door Vlaanderen and Scheldeprijs.

Flemish sports minister Ben Weyts met with sporting bodies in Flanders on Thursday to discuss a collective response to the coronavirus pandemic, and a communique was issued shortly afterwards.

“Given the further spread of the coronavirus and the updated insights and recommendations from health professionals, the sports world wants to explicitly and proactively assume its social responsibility," read the statement, according to Sporza.

"It is the great strength of sport that it affects many people, but that strength becomes a vulnerability when a virus spreads wherever large groups come together. This was not an easy decision, but there is no other way.”

Belgium now has 399 confirmed cases of coronavirus after 85 new cases were reported on Thursday, including 66 in Flanders alone.

On Thursday morning, Hans De Clercq of the Gent-Wevelgem organizing committee was still hopeful that his race could continue even amid the tighter restrictions on sporting events in Belgium.

“We want our race to take place and can do so with a strict minimum of public,” he told Het Nieuwsblad. “We can completely close the square in Ypres, where the start is. Only those who are accredited, such as riders, team managers, and anyone who really has something to do with the race will be admitted. The Kemmelberg can also be closed completely.”

The independently organised E3 BinckBank Classic had this week delayed constructing its VIP tents on the Oude Kwaremont and in Harelbeke, mindful of the increasingly likely prospect of cancellation.

The suspension of racing in Flanders for the rest of March affects both the men’s and women’s calendars, with Nokere Koerse (March 18), the Bredene Koksijde Classic (March 20), the Driedaagse Brugge-De Panne (March 25 and 26), the E3 BinckBank Classic (March 27) and Gent-Wevelgem (March 29) falling by the wayside.

Another trio of Flanders Classics events – Dwars door Vlaanderen (April 1), the Tour of Flanders (April 6) and Scheldeprijs (April 8) – remain on the calendar for the time being, though their status is precarious.

The Covid-19 pandemic has already seen the suspension of sporting activity in Italy, where the entire country was placed in quarantine earlier this week. Milan-San Remo has been postponed for the first time since 1945, while Tirreno-Adriatico, Strade Bianche, the Trofeo Binda and the Giro di Sicilia have also been postponed. UCI president David Lappartient acknowledged that the Giro d’Italia, which gets underway on May 9, is at risk.

Despite the spread of the coronavirus in France and the withdrawal of seven WorldTour teams before the start, Paris-Nice has gone ahead this week, albeit with restrictions on spectators at stage starts and finishes. The ASO's cycling director Christian Prudhomme insisted on Wednesday that the race would be completed despite the rising number of cases in France.

All public events cancelled in Belgium until April 3rd. We are fully aware of the need for these measures. So no @GentWevelgem and no @DwarsdrVlaander for @FlandersClassic. Concerning the @RondeVlaanderen we will have to await further developments.March 12, 2020

The uncertainty about when racing will be resumed and the potential calendar change for the Olympics make any discussion about potential new dates for our races premature.March 12, 2020