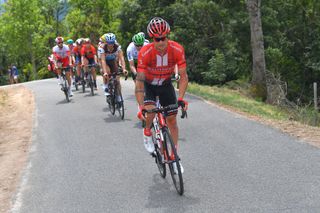 While Rohan Dennis (Team Ineos) rode to victory in the opening race of the Digital Swiss 5 virtual race on Monday – held on virtual training app Rouvy – Team Sunweb were arguably the strongest team, placing two of their three participating riders in the top four.

"It's a very weird feeling," runner-up Roche said in a video posted on his team's Twitter account. "It's not a time trial, it's not a sprint; it's more of a mental challenge than anything, but obviously you need to be in good condition, too.

"I've been practising doing online races during the week because the effort is completely different to what we're used to," he continued. "I had a good battle with James Whelan – he put the pressure on me – but I was able to see the kilowatts on the screen, so I tried to follow his pace and then accelerate when he slowed down. I managed to do just that on the last bit and then get a gap."

Hamilton, meanwhile, took to social media to convey how hard racing at home on a turbo trainer really is.

"That's the hardest thing I've ever done," he wrote on Twitter.

"I have to say, that was one of the hardest hours I've ever had in my life," Hamilton added on his team's website. "It was definitely the hardest I've ever gone on the indoor trainer before. It was good fun, though!"

The Digital Swiss 5, which is using video footage on the Rouvy platform of sections of the now-cancelled 2020 Tour de Suisse WorldTour stage race, continues on Thursday with a 46km 'stage' around the area of Frauenfeld, and will end with a fifth and final race on Sunday, April 26.

Read more here about how you can follow live streams of the racing.