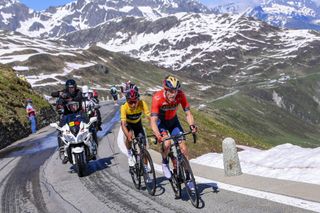 The Tour de Suisse will not be held in 2020, the race's organisers have announced.

The move comes as a result of the COVID-19 coronavirus pandemic, which has seen Switzerland shut down all public and private events, closed restaurants, and limit who can enter the country.

In contrast to numerous other WorldTour races whose organisers have stated their desire to reschedule for a later date, the Tour de Suisse has been cancelled altogether for 2020. The race was originally due to run from June 7-14.

Switzerland has been one of the countries hit worst by the pandemic, recording 19,106 cases and 565 deaths as of Friday morning.

"It was with a heavy heart that we have made this decision due to the Corona pandemic," said Oliver Senn, co-managing director of the Tour de Suisse organisation.

"We are, however, convinced that it is the best solution to provide certainty and thus planning security for participants, fans and partners.

"For the Tour de Suisse, it is also an important step to ensure the continuation of the event in the future. We would like to thank all sponsors, host cities, suppliers and our staff for their extraordinary support and solidarity."

A statement issued by race organisers outlined a number of factors that led to the decision, including the uncertainty making planning the event impossible, the lack of guarantees that riders will be able to prepare for the race, and the additional strain on the health service that the race would generate.

The statement also noted that staging the race at an alternative date in 2020 would also result in financial losses, given that acquiring sponsors and selling hospitality packages is not possible at this stage, while delaying a decision further would also increase costs.

The race is set to run in 2021 "with very few changes from the plans for this year's event", read the statement.

Organisers will instead run a virtual racing series – The Digital Swiss 5 – set to be held from April 22-26. The series, which will run on the Rouvy app, has already seen 17 WorldTour and ProTeams sign up to participate, as well as the Swiss national team. Depending on the event's success, a digital Tour of Suisse, held on the same dates as the WorldTour race, would also be possible.

Earlier this week, the UCI suspended all racing up to June 1, while ASO announced that the month's other major stage race, the Critérium du Dauphiné, would be postponed.

July's Tour de France looks set to be the next race on the chopping block, with race director Christian Prudhomme stating that dates in late July or August are being considered, adding that the race would not take place behind closed doors.

The Tour de France is seen a vital for the survival of a number of WorldTour teams and so is likely to be pushed back to when life returns to some form of normality in France and across Europe.

On Thursday, following the UCI stakeholder conference call, La Gazzetta dello Sport suggested the Tour de France could be held between July 25 and August 16. It would be followed by the Vuelta a España, with the Giro d'Italia in October and other races in the summer possibly running into November.

It was reported last week that ASO had set a deadline of May 15 for a decision on the original date, while the UCI will hold stakeholder meetings every two weeks.