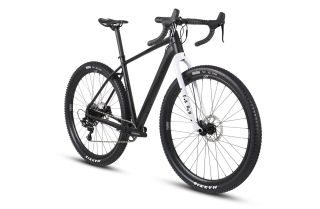 The brand better known for its wide drop handlebars and gravel adventure accessories has now ventured into producing a frame. Ridefarr’s GMX acronym unpacks as ‘Gravel Monster Cross’, which positions it as a bike purposed for both traditional off-road touring and gravel adventure riding.

Featuring a 6061 aluminium frame and chromoly fork, the GMX is intended to offer riders a broad purpose all-terrain endurance bike with the benefit of rolling big wheels.

Geometry is on trend for a contemporary gravel touring bike, with the GMX featuring a 69-degree head angle, balanced by a 74.5-degree seat angle. The largest frame sizes have slightly steeper head angles, at 69.5-degree.

Best gravel bikes: Fun and fast adventure bikes for your next off-road ride

Best gravel bike wheels: Our pick of the best gravel wheels for racing and adventure riding

Best gravel tyres: from dusty to dirty, here's our pick of the best tyres for your gravel bike

Utility was a clear design objective and as such, the GMX features an array of mounting points. There are two hydration bottle mounts in the front triangle, another below the down tube and top tube mounts for a frame bag.

Beyond its ability to haul along a lot of refreshment and some overnighting essentials, the GMX’s mechanical frame specification is geared toward low-maintenance. Its cranks spin within a 73mm threaded bottom bracket, which should avoid the creaking caused by fine dust ingress – especially if you are rolling huge gravel road mileages.

Ridefarr’s industrial designers have spaced the rear triangle to accommodate a wide 148mm hub and there is adequate room for 29 x 2.25in tyres. Brake disc specification is flat-mount 160mm rear and post-mount 160mm front.

Frame weight rates at 1809g, while the steel fork adds another 1,405g. Although the idea of a 29er gravel touring bike might appear odd to some, it has a strong appeal to particularly tall or large riders, who feel more comfortable rolling along on bigger wheels off-road, with more air volume in the tyres.

Riderfarr is marketing the GMX in six frame sizes, ranging from XXS to XL. It is priced at $695, which includes the chromoly fork, integrated headset, both thru-axles, alloy seat post clamp and all relevant frame mount bolts.