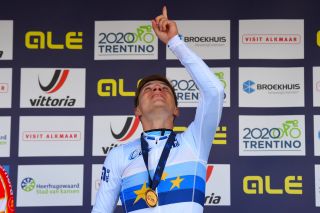 The 2020 European Championships will take place in Plouay, France from August 24-28, the European Cycling Union (UEC) announced on Monday. The championships had initially been due to take place in Trento in September, but the Italian city postponed its hosting of the event until 2021 due to the impact of the coronavirus pandemic.

The rescheduled 2020 European Championships will be preceded by national road race championships across Europe and will take place in the week leading up to the Tour de France Grand Départ in Nice on August 29.

Remco Evenepoel won the elite men’s time trial in Alkmaar last year, while Elia Viviani claimed the road title. There was a double triumph for the Netherlands in the elite women’s events, with Ellen van Dijk landing the time trial and Amy Pieters winning the road race.

In a statement on Monday, the UEC said that the schedule had been devised to "enable Elite riders to first of all compete in the national championships scheduled in most European countries on 23 August, then travel to Nice (France) for the start of the Tour de France."

The European Championships programme will also allow riders to compete in the Bretagne Classic Ouest-France WorldTour race, which is scheduled to take place in Plouay on August 25. The corresponding Women’s WorldTour event, the GP de Plouay-Lorient, is on August 26.

"In view of the especially difficult season because of the COVID-19 health crisis, being able to stage the European Road Championships is undoubtedly a great source of achievement and pride," said UEC president Rocco Cattaneo. "Since the start of the health crisis that has affected the whole word, we have worked tirelessly to try and save, as far as possible, scheduled events and following the postponement of the Trento Championships (Italy) in 2021, we initiated a series of contacts in order not to lose our major event."

Cattaneo also highlighted that the Championships would be held "in close cooperation with the Bretagne Classic Ouest-France planned on Tuesday 25 August".

Brittany will also play host to the French National Championships on the weekend preceding the European Championships in Plouay. The original host Plumelec withdrew from hosting French Championships to the restrictions imposed by the COVID-19 pandemic, but the French Cycling Federation has confirmed that Grand-Champ in the Morbihan department has stepped in as a replacement.

The Morbihan town of Sarzeau, where UCI president David Lappartient is the mayor, had been rumoured to be among the candidates to host the French Championships.

The individual time trial events are fixed for Friday, August 21, with the road races to take place on the weekend of August 22-23. Defending champion and Morbihan native Warren Barguil (Arkéa-Samsic) will line out in Grand-Champ, while Ouest France reports that Thibaut Pinot (Groupama-FDJ) is also set to ride the French Championships.