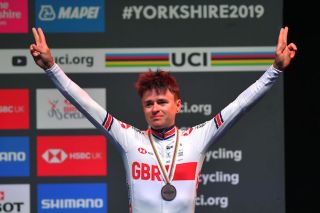 Disconsolate and on the verge of tears, Great Britain's Tom Pidcock appeared crushed as he gingerly made his way through the mixed zone after finishing fourth in the under-23 men's road race at the World Championships in Yorkshire on Friday. He had given everything in the race and, despite a crash, had crawled his way back into contention only to miss out.

Even when the Netherlands' Nils Eekhoff was disqualified and stripped of the rainbow jersey – a decision that moved Pidcock up a place into third – the 20-year-old remained disappointed with the result.

"I'm really frustrated. I gave it 100 per cent, you know? I did everything I could to get on the start line. I wasn't in the best shape in the world, but I gave it my best shot and, until 50 metres to go, I was going to win the world championships. But I didn't have any legs left. I sprinted as fast as I could to the finish line, but that was it," he said.

The cyclo-cross star wouldn't blame his crash on missing out on the rainbow jersey, but his preparation for the Worlds had been hit after a serious fall at the Tour de l'Avenir stage race in August.

"I've not had the best preparation, and that in itself is an achievement, I think," he said. "To do that after what had happened is quite incredible, and the support on the road was unbelievable. I've never had anything like it. Every single person was cheering my name. I'll never forget it."

The controversial decision by the UCI to disqualify Eekhoff caused confusion at the finish, with Pidcock riding back to the team pits before then being ushered back to the podium to pick up his bronze medal.

"Well, it's not how I'd like to win a medal, to be honest, but I guess there are rules, and consequences if you break them, and unfortunately for Eekhoff, I guess he did something wrong. It's nice to come away with something, but it's not how I would have wanted to do it," said Piddock.

"The bronze medal meant that I had more time to enjoy the crowds and the podium, but I was still disappointed. There's only one place that matters at the World Championships. At least now I've got something, but I would have liked a jersey," he said.