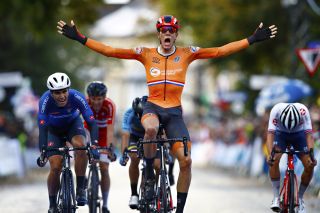 Nils Eekhoff (Netherlands) crossed the line first in the U23 road race at the UCI Road World Championships on Friday, but race officials later stripped him of that title and disqualified him for pacing behind his team car earlier in the race.

Eekhoff sprinted to victory from an elite seven-rider group in a rain-soaked race in Harrogate, as Samuele Battistella (Italy) and Stefan Bissegger (Switzerland) sprinted in for the silver and bronze.

The race jury officially named Battistella winner of the men's U23 world title, with Bissegger moving up to silver and Great Britain's Tom Pidcock moving onto the podium with bronze.

Italian television channel Rai have reported that Eekhoff's GPS data aroused concern from the race jury, with the Dutchman suggested to have reached speeds beyond what should have been possible on a bike as he chased back on after his crash.

The UCI belatedly confirmed that Eekhoff, Alexander Konychev (Italy) and Andreas Nielsen (Denmark) were all disqualified for prolonged drafting behind a team car.

Eekhoff crashed into a parked car along the course with almost 130km to go.