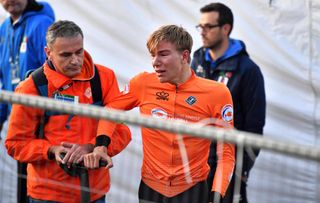 Nils Eekhoff has described himself as 'devastated' and 'mad' as he tries to come to terms with being disqualified after coming across the line first in the U23 road race at the UCI Road World Championships.

The Dutchman raised his arms in Harrogate, only to be told nearly an hour later that he'd been disqualified for drafting behind a team car earlier in the race.

After a trip to the UCI video referee truck, he went back to the tent behind the podium, where he was later informed of the decision. He rode through the media mixed zone in tears before heading back to the Dutch team's hotel, where he was consoled by his parents.

After a while, Eekhoff came down from his room to give his reaction to Cyclingnews and two Belgian journalists, before speaking to Dutch television.

"I feel devastated. I don't really know what I feel at the moment… mad," he said.

"It's hard. I don't know actually what I can do about it right now. My management is looking at the options. To me it feels a bit unfair."

Battistella named U23 champion as Eekhoff disqualified in road race

The incident occurred after Eekhoff crashed with just under 130km left to race, dislocating his shoulder and breaking his bike. He then spent more than two minutes behind his team car, according to the Dutch coach, as he made his way back to the bunch.

"I crashed, got a dislocated shoulder, put it back, but also had a mechanical so it took longer, then I got back on, the car brought me back to the caravan, and at that moment I rode myself towards the peloton," he said.

"At the moment I crashed, it was still 125km to go. The race was still to be ridden. In my opinion I fought for it. It should be possible after a crash that you can be brought back to the caravan. I had no idea I was taking a risk."

Eekhoff then After celebrating wildly at the finish and giving a post-race interview to the UCI ahead of what he presumed would be a trip to the podium, Eekhoff's joy soon turned to anxiety.

"After 15 or 20 minutes, they said I had to go to the jury car. At first, I did not know what was going on. I started to get a bit nervous because no one was telling me anything," he said.

"They showed me the footage and said they hadn't made their decision – they just wanted to show it and I could say my thing. Then I went back to the tent, and I saw Pidcock was already there, so I was like 'ok'. Then one minute later they told me I was disqualified because of the image of cycling."

Asked how he felt in that moment, Eekhoff, voice trembling, said: "I just started crying. I felt helpless. I had no idea what I could do.

"They just left me in the tent. They left, and I was sitting there. I just wanted to go home."

It will clearly take a long time for Eekhoff to absorb such a disappointment – not that he intends to try and forget about it. He made it clear that he and his management representatives, SEG Cycling, are looking into action they can take to dispute the UCI's decision.

"They are looking at the options. I don't know what can be done. I just spoke with them and they also think they [the UCI] cannot do this in this way. We will see. I have to hear later from them.

"I think the national federation went to the jury afterwards. The federation is not going to do anything but still my management is going to look into all options."

Asked if he had received support from his fellow riders, he said: "Just from my teammates. They felt for me. I didn't look at anything on social media yet. I cannot handle that yet."