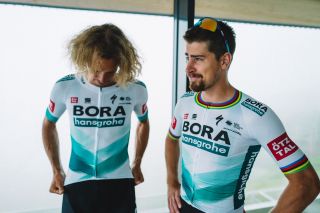 The Bora-Hansgrohe team has revealed a new racing kit for the Tour de France, altering the colours and adding the Austrian tourism logo Bike-Ötztal to the team’s jersey.

Bora-Hansgrohe’s usual colours are black, peppermint green and white, whereas the new design flips the colours with white now the prominent colour. The shorts remain black with green trim, and the red Bike-Ötztal logo stands out on the arms of the jersey. The race clothing is made by Italian brand Sportful.

“From a tourism perspective, the Tour is, of course, THE platform in professional cycling. I hope that our successes and riding style will make viewers around the globe more aware of the beautiful Ötztal Valley,” team manager Ralph Denk said.

“The white jersey was already a great success last year and very popular with fans. We hope that with this, we can offer an attractive alternative to our black kit this year as well.”

Kruijswijk and Buchmann crash out of Critérium du Dauphiné

Bora-Hansgrohe confirmed on Monday that Max Schachmann, Emanuel Buchmann, and Gregor Mühlberger will all start the Tour de France, despite sustaining injuries in recent races.

Peter Sagan is also in the eight-rider line-up, with the three-time former world champion targeting an eighth green points jersey and stage victories.

Buchmann finished fourth overall in 2019, while Schachmanm won Paris-Nice but the team confirmed that because of their injuries, they would be racing "under different conditions than originally planned".

"All three riders have done a superb job with the intensive rehabilitation measures we have implemented over the last few days – this is, after all, also what makes a world-class athlete," said Jan-Niklas Droste, who is part of the Bora-Hansgrohe medical team.

Schachmann suffered a broken collarbone after a driver veered onto the course in the final kilometres of Il Lombardia and cut him off. He managed to remount and finish seventh in the race but his season was at risk after he was diagnosed with a broken collarbone.

Buchmann and Mühlberger crashed out of the Critérium du Dauphiné on the descent of the Col de Plan Bois after just 29km into stage 4, however, both riders escaped fractures.

"This has been a bitter setback. I actually thought that the Tour was over when I couldn't get up on my own after the fall. But luckily nothing was broken," the 27-year-old Buchmann said.

"To suffer a fall like that was such a shame because I was in really good shape. At the Dauphiné, I was the strongest on the mountain behind [Primož] Roglič, together with [Thibaut] Pinot.

"Now there are a few question marks hanging over my head, especially since the race is about to kick off in earnest so soon. There’s no time for a transition because, on the second stage, we’ll already be heading into the mountains. We’ll just have to wait and see how far I can make it up there. I can only tackle the Tour from day to day now.”