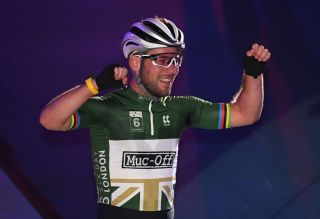 Mark Cavendish and Owain Doull have set-up overall victory at Six Day London with an aggressive and successful session on the penultimate evening of racing on the London velodrome.

The British pair now have a great chance of winning Six Day London in the final session of racing on Sunday.

Cavendish missed out on the overall title in 2016 and 2017 and last year illness prevented him from racing. He has twice finished a runner-up at Six Day London with Bradley Wiggins and then Peter Kennaugh and is desperate to triumph this time around.

The Manxman has endured a difficult 2019 season on the road but appears close to his best and upbeat now that it has been confirmed he will ride for Bahrain-Merida in 2020.

Cavendish and Doull have raced carefully in the early days of the Six Day London and then Cavendish beat Elia Viviani twice in sprints – in the Team Elimination and final Madison – to help the British pair climb to top of the general classification and fuel hope of a final overall victory.

Cavendish and Doull are top of the classification with 395 points. World champions Theo Reinhardt and Max Beyer trail at 368 but are on the same lap. Viviani and Simone Consonni are one lap down with 399 points, with defending champions Yoeri Havik and Wim Stroetinga on 385. That sets up a fascinating day of racing and a thrilling final chase.

Signing Mark Cavendish will improve me as a sprinter, says Bahrain-Merida's Colbrelli

Cavendish went deep to cling on in the Team Elimination with Viviani chasing hard but roles reversed in the closing Madison, with the Manxman beating the Italian and Max Beyer to seal victory.

"I was almost at a standstill. I was telling Owain with seven laps to go, 'rest, rest, rest,'" said Cavendish. "It worked and I’m happy with that. Everyone’s tired now, we’re five days in.

"When I attacked, it was to try and see what the week brings. To save our energy, try and stay on the same lap and go aggressive in the end, you know."

Five teams came into Friday night on the same lap, with Viviani and Consonni leading on points. The Italians lost a lap in the very first event of the evening, a 20-minute Madison, allowing Cavendish and Doull to move joint-top of table. Then Cavendish beat his biggest track rival to win the final race of the night.

The Italians had appeared to join forces with Reinhardt and Beyer in an attempt to win but Doull joined them to police the move. The Welshman produced an huge turn before catapulting Cavendish into action on the very last lap. Cavendish finished things off to beat Viviani and set-up a final battle on Sunday evening.