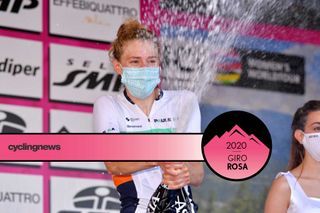 After Equipe Paule Ka bettered some of the top Women's WorldTour teams during the opening team time trial, Lizzy Banks took the second Giro Rosa win of her career on stage 4 in Tivoli.

Last year, Banks' stage win also came on the longest stage of the race, and this year she won on a day which marked the lengthiest Women's WorldTour race to date. Coming in at over 170km, the stage appeared to be suited to a breakaway, and after several attempts from her colleagues, Banks successfully broke free with Eugenia Bujak (Ale BTC Ljubljana), who would settle for second.

The British rider attacked her breakaway companion at the bottom of the steep, cobbled climb into Tivoli, and her effort was such that after crossing the line she vomited - proof, if ever it was needed, of how deep riders go.

"I knew how good it felt to win last year and so that whole day I just had that feeling in my head," Banks said of her thoughts during the 70km-long break, "and I was just chasing that and I'm so grateful to my team."

It's clear that Equipe Paule Ka gets the best out of their riders, and Banks expressed her gratitude for the staff.

"The mechanics are up until 11 p.m. working on our bikes, our soigneurs wake up at 7 and they go to bed at midnight," the 29-year-old said, getting emotional. "Our DS' [directeur sportif's] came here and they did a full recon for us so they knew what these finishes would be like and I'm so grateful to everybody."

Equipe Paule Ka also have 22-year-old Kiwi Mikayla Harvey sitting first in the young rider classification, with 4:24 over her next rival.

"We wanted to go for the U23 jersey with Mikayla," Banks said of the team's ambitions for the under-23 designation. "We got into that jersey after the TTT with Emma and obviously Mikayla was on the same time. We've passed it over to Mikayla now and we hope that she can hold it for the rest of the race because that was our big goal coming here.

"Of course we want to chase stages but Mikayla is such a talented rider and she works so hard for the team the whole year, and it's really nice to support her and give something back."

Banks, who came to racing late in 2015 at the age of 24, insisted that in spite of the fact that she now sits in 11th place on general classification, 5:56 down on Annemiek van Vleuten (Mitchelton-Scott), she is not aiming for a GC place.

"For sure, I'm not here for the GC, I've been working really hard for the team the past few days and I will continue to work hard tomorrow."

Re-iterating her return to domestique status after today's win she added, "I'm not a threat to the GC. I'm not going for the GC and stage 8 is not a stage for me," she said. "We are looking for the GC with Mikayla and if Elise [Chabbey] gets in the top 10 as well then that's a bonus for us."

The team's efforts will instead turn towards Tuesday's flat finish in Terracina, which looks likely to end in a bunch kick.

"Tomorrow is a really good opportunity for our Danish sprinter Emma [Norsgaard Jorgensen], she's so talented and I really want to see her get the stage win in that national champions jersey.

"We're still looking for more and we're still hungry for more, so I think success breeds success and there's going to be a really good feeling in the team tonight. I'm over the moon."