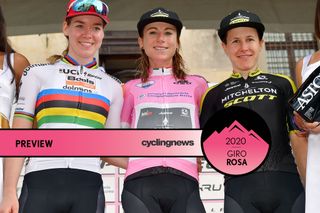 The Giro Rosa, as the only women’s Grand Tour, is always fiercely contested, but this year the stakes seem even higher. The opportunities to race have been so few that riders in the talent-packed field are hungrier than ever for a noteworthy result.

We’ve given you the overview of what to expect in our race preview so now let’s take a closer look at the key riders to watch out for in this nine-stage edition of the Giro Rosa, starting on September 11.

Obviously, Annemiek van Vleuten has to be at the top of the favourites list. The road race world champion has won the general classification the past two years, and done so in emphatic style, with her winning margins stretching beyond three and four minutes. From what we have seen during the run-in to this year’s event, the Dutch rider is likely to be just as formidable in her last Giro Rosa with Mitchelton-Scott, before moving to the Movistar Team Women in 2021.

Van Vleuten started this interrupted season with a streak of five straight wins – a streak that ended at the the Dutch National Championships last month, when she instead came second. Since then she has won the European Championships and just about singlehandedly destroyed any hope that the sprinters had of making it a bunch finish at La Course by blowing apart the field, and then, despite the amount of work she’d done, rolling over the line in fifth.

The fact that she can make the top five in a race that doesn’t really suit her means that her position as the unquestionable favourite isn’t tarnished by the reduction in the number of long finishing climbs this year, or the lack of an individual time trial. However, it may at least give her rivals a glimmer of hope.

Two-time winner Anna van der Breggen has a history of taking the battle to Annemiek van Vleuten, and again is considered one of the most likely to stand up to the dominant defending champion. The Boels Dolmans rider, who came second last year, has delivered a couple of big wins since the season restart.

It was Van der Breggen who trumped Van Vleuten in one of the fiercest battles in women’s cycling, the Dutch National Championships, and she also secured the European Championships time trial title last month.

However, while Van der Breggen may be a near-match for Van Vleuten, what could work against her is that she’ll also have to contend with the defending champion’s teammate, Amanda Spratt. Boels Dolmans used to look unassailable at the Giro Rosa – and just about every other race, too – but now it is Mitchelton-Scott that is the team to beat.

It was the potential Mitchelton-Scott saw in Van Vleuten as a Giro Rosa contender that made the Australian team get serious about the overall category, but it is Amanda Spratt that will make sure the focus on the maglia rosa doesn’t disappear along with the Dutch rider.

The Australian champion has stepped it up a notch in recent years, and is the clear heir apparent, having stood on the podium of the Italian race the last two years.

This year, Spratt is again a team leader along with the defending champion. While Van Vleuten may cast a big shadow, dual leadership at the race comes with the advantage of splitting the attention of rivals, and therefore giving Spratt more of a chance to slip away. Plus, if she does get out in front at any stage, as a teammate, she is probably the only serious contender you wouldn’t expect Van Vleuten to relentlessly chase down. Not this year anyway.

The Italian rider is, as always, coming into the race with an impressive record behind her, but this year she has something a little extra as well.  It’s been a tough year for Italy, which was hit hard and early by the COVID-19 pandemic, so as a proud Italian she’s determined to give the locals something to smile about at their home tour. With the way she’s been performing, that seems quite a possibility.

Elisa Longo Borghini – who came second in 2017 – has been firing on all cylinders since the season restart, as has her team. The home-nation’s top hope has climbed into the top five in the world rankings by finishing sixth or better in all but one of her races since the season restart. Importantly, she’s also shown the form and confidence to go toe-to-toe with Van Vleuten, taking silver after a fierce fight for the top spot at the European Championships. Plus, she’s now got the current number-one team in the peloton behind her, with the squad hitting its stride in its second year.

It hasn’t exactly been the ideal run into the Giro Rosa for the South African champion. The gruelling Italian tour is set to be her return race after crashing before Strade Bianche. Despite that hurdle, and 60 stitches, the experienced and resilient Ashleigh Moolman-Pasio is a rider it would be unwise for any of her rivals to discount, especially as the team has said that her training data confirms she is in good shape.

The CCC-Liv team member’s best result in the Giro Rosa was her second place in 2018, but the one that really put on display her ability to fight back in challenging circumstances was last year’s fourth. Even after a disastrous individual time trial – where she was outside the top 10 on the stage and fell six places on the GC to ninth – Moolman-Pasio picked herself back up and climbed back to within one spot of the podium. It’s that type of resilience that means despite the injury and lack of racing, she remains a key rider to watch.

The Polish rider has twice won the white jersey, has finished in the top 10 overall for the past five years and rose to fifth last year. On top of that, Kasia Niewiadoma’s lead-in has been just as impressive as her consistent record at the Giro Rosa. The Canyon-SRAM rider finished just off the podium at La Course, and just on it at the European Championships.

It’s also not only her form that is running in the versatile rider's favour this year, with the course looking like one that may suit her more than those of the past couple of editions. It was the hard mountain-top finish on the second-to-last stage that took Niewiadoma out of the running for the podium last year, and the torturous climb of the Zoncolan that set her back two places the year before, so fewer long finishing climbs might just remove an obstacle on the path to a higher placing.

The Danish rider marked herself out as one to watch when she won the youth classification in 2017, and then followed that up by finishing sixth in 2018 as her then teammate, Moolman-Pasio, took second. The upward trajectory didn’t continue last year, with a 14th-place finish, but with a fresh team behind her, that could change.

Uttrup Ludwig moved to FDJ Nouvelle-Aquitaine Futuroscope this year, which means she’s likely to have some handy support from the likes of Australia’s Brodie Chapman and French white jersey contender Evita Muzic. Plus, even if Uttrup Ludwig isn’t fighting it out near the top of the overall rankings, she is always one to keep an eye on, as she has a habit of finding ways to inject excitement into a race.

It’s been a breakthrough year for the 22-year-old Liane Lippert, who started on the front foot with second overall at the Santos Women’s Tour, quickly followed by her first Women’s WorldTour win at the Cadel Evans Great Ocean Road Race in Australia. That put her in the series lead – a position she has since handed over to Lizzie Deignan – but she still maintains a firm grip on the lead of the Women’s WorldTour youth classification.

Lippert is also stepping up to ride the Giro Rosa for Team Sunweb as a supported GC rider, alongside Juliette Labous. It is a new generation of riders leading the charge for the team this year after its main contender of recent years, Lucinda Brand, shifted over to Trek-Segafredo. Lippert will no doubt be eyeing the white jersey of the youth classification, along with teammate Labous, but a solid result on the overall also looks within grasp.

Three-time Giro Rosa winner Marianne Vos may not be a favourite for the overall victory anymore, although that doesn’t mean she should fall off your list of riders to watch. Vos has won more stages of the Giro Rosa than anyone else – a hefty total of 25 – and last year she used that impressive turn of speed to add four to the tally.

This year, after a near miss at La Course, she is in the unusual position of heading into September without a road win for the season. That means the prolific rider, who revels in the joy of throwing her hands up in the air no matter how many times she has done it, is likely to be highly motivated to chalk up that first victory for the season, and perhaps a second and third as well.

It was the former road race world champion who beat Vos to the line at La Course last month, and Lizzie Deignan could also prove to be a foe when it comes to stage victories at the Giro Rosa. The British rider revels in the same punchy climbs that suit Vos and has shown that she’s found her race-winning ways once more. Her La Course victory last month, with a well-timed bike-throw after an uphill drag to the line, came just days after she also topped the podium at another hilly race, the GP de Plouay.

The green jersey has been monopolised by riders that have also stood on the overall podium in recent years. It was Annemiek van Vleuten’s in 2017 when she came third overall, Amanda Spratt’s in 2018 when she also took the final step of the overall podium, and in 2019 Van Vleuten’s again. This means we really need look no further than the list of overall contenders to find the riders most likely to also end up winning this category.

Much like the green mountains jersey, in recent times the cyclamen points jersey has gone to one of the top overall riders; in fact, Van Vleuten has taken it for three years in a row now. There has been one rider, though, that has come close to breaking that streak, and that’s Marianne Vos. Her impressive four stage victories in 2019 meant she crept within six points of Van Vleuten, who was on 74. Given there are a number of stages that could suit Vos this year, she could again have the potential to end van Vleuten’s dominance in this classification.

Newly crowned French ITT National champion Juliette Labous (Team Sunweb) won the youth category last year, and came 11th overall. With a record like that, she will of course be one to watch. However, it looks like she’ll have some tough competition close at hand. Teammate Liane Lippert has been making her presence felt both in and outside the youth category this year (earning a place in the list of our 10 riders to watch above). Evita Muzic (FDJ Nouvelle-Aquitaine Futuroscope), who shared the youth category podium with Labous last year, is another that could prevent her compatriot from taking the white jersey. She has already delivered two top-10 finishes this season, at the European Championships and the Giro dell’Emilia.