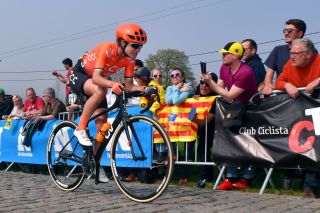 Lars Boom is revelling in his new role as performance manager at CCC-Liv with a priority of supporting the CCC-Liv team, including Marianne Vos, bid to win the first-ever women’s Paris-Roubaix on October 25. The recently retired pro is best known for winning the 'Paris-Roubaix' stage of the 2014 Tour de France and outlined the top three tips for tackling the unique cobbles of the Hell of the North.

"This year is the first-time Paris-Roubaix for the ladies, and with my experience on the cobblestones and the Classics, CCC-Liv asked me to share my experiences," said Boom, who spent his last year racing professionally with Roompot-Charles in 2019.

CCC-Liv: No reason to assume we can't survive this season

The UCI announced the revised late-season calendar in May, which is a replacement for plans that were halted due to the COVID-19 coronavirus pandemic. Although there have been some cancellations since then, the Women's WorldTour has retained 15 of the original 22 events, including a surprise inaugural addition of the women’s Paris-Roubaix.

"It took a little bit too long, I think," Boom said. "If you see where women’s cycling is going, they should have more big races added to the calendar because they deserve it. Their races are really exciting to watch, with nice races going on and always something happening. I was enthusiastic to see that Paris-Roubaix was added to the calendar. It also opened up an opportunity for me as a performance manager in the near future. It would also be nice to see other races such as Milan-San Remo, that would be nice in the future."

CCC-Liv have not selected a team to race the women’s Paris-Roubaix yet but Boom pointed to several riders who could do well on such challenging terrain including former multi-discipline world champion Marianne Vos, Soraya Paladin, Ashleigh Moolman-Pasio and Sabrina Stultiens.

"We have Soraya and Ashleigh who could win it because those two are really strong, and Sabrina has a background in cyclo-cross and it suits her as a technical rider and she can be quite good as well," Boom said.

"I think every race where you are part of a team you try to work together to win it. This race is even more special for me, so I will give my best to try to win it with the team."

Race rganisers ASO have not announced route details for the women’s race, however, Boom made a few predictions regarding the event distance and cobblestone sectors that the women’s field might contest. Boom thinks the route could be anywhere from 120km to 150km, and that the cobblestone sectors will most likely begin at the Forest of Arenberg, located roughly 80km or 90km from the velodrome in Roubaix.

Boom believes that previewing the cobblestone sectors is the number one priority before taking on a race like Paris-Roubaix, where he said the pave is unlike any other cobbled Classic on the calendar. He plans to bring the team to preview the course in August and again closer to the race in October, when the area could be raining and cold.

"Previewing the course is one of the most important things you do," Boom said. "If I can watch the riders riding on the cobbles then I can give them advice; holding handlebars more loosely, leaning a bit to the back or trying this or that, so it’s really important to do a proper recon," Boom said.

"The cobbles are totally different than a race like Flanders," he stressed. "Sometimes you think the cobbles are just thrown from an airplane, like they just opened up the door and threw them straight down and then they put some dirt over them. So, the recon is a big deal because it can be dangerous. That’s why I’m really happy that I will get the opportunity to do a proper recon with proper materials, and I hope to share my experience with the team."

Outside of previewing the main cobblestone sectors, Boom offered his three main pieces of advice for racing Paris-Roubaix.

"If you're too far back there will be crashes, flat tires and you will be caught behind, and the further back you are, the more the speed drops down. The position when you hit the cobblestones is so important and that can make or break your day, so it’s really important."

"When you ride on the cobblestones you always have to be looking toward the front, 200 metres head, to see what’s happening on the cobblestones. For example, if you’re riding in a group and you see the back or the shoulder of another rider dropping down, then be prepared because something is happening [changes in terrain].

"You can really anticipate, move yourself and try to anticipate what the cobbles are doing ahead; drop your back and shoulders down, shift back, don’t hold your handlebars too tight, and let the bike do the work a little bit for you.

"If you fight the bike, it will fight you back and you will lose speed."

"The kind of bike you ride matters. This year with Liv, we still ride on the normal brake pads and don’t have disc brakes. I’m working with the team on what we are going to do because it will be late October, and the farmers will be taking out the crops from the land, and they use the cobblestones to do that, so there will be a lot of mud on the road.

"The chances of rain are higher in October and it can also be cold. If it’s raining and cold it will be a tougher battle than in April. We will have to plan differently for clothing and tires and perhaps drop tire pressure (if it’s wet), you really have to wait and see what is happening on the day itself, too, and you have to work with that."