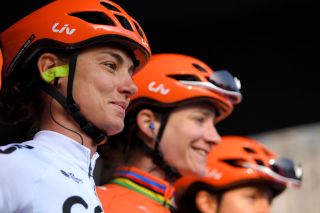 CCC-Liv have confirmed that all of their sponsors have fulfilled their obligations to date amid the COVID-19 coronavirus pandemic. The Polish footwear company CCC decided to end its sponsorship of the men’s WorldTour team, however, a spokesperson for the women’s team has reiterated that the two teams are separate entities and under different contract agreements with CCC.

"We understand that people wonder if there are consequences for CCC-Liv, and if so, what these would be," a spokesperson for the team told Cyclingnews.

"However, it is difficult to be very concrete about this. We would like to emphasise that CCC-Liv (Women's WorldTour) is a standalone entity, meaning that we have our own sponsorship agreements with CCC (and other sponsors).

"Until today all sponsors have fulfilled their obligations. There's no reason to assume that we cannot 'survive' this season."

It was reported in early April that Dariusz Milek, the billionaire owner of CCC, was looking to cut spending as the company’s share prices dropped by 90 per cent compared to 2018, while revenues are down nine per cent year-on-year for the first quarter due to the economic impacts of the COVID-19 pandemic.

Riders at the men’s CCC Team have accepted a 50 per cent salary cut in order to continue racing in the revised late-season calendar that is expected to run from August 1 through November 8. According to reports in Het Nieuwsblad and La Gazzetta dello Sport, and confirmed by a source to Cyclingnews on Wednesday, CCC will end its title sponsorship this year, a year before the agreed three-year term.

The CCC-Liv team has told Cyclingnews in April that they are continuing to prepare for a potential re-start of racing season despite the news that CCC was struggling financially. The team also noted at that time that any statements on the matter would only be speculative.

"The coronavirus has not yet been defeated and we cannot look into a crystal ball," the spokesperson told Cyclingnews. "It is therefore impossible to say what the world will look like in a few weeks' or months' time and what the sponsoring climate in sports would look like then. We are in discussion with CCC and our sponsors to see how we can best anticipate developments that may come our way."

The UCI has suspended all racing until July 1, and men’s and women’s WorldTour racing until August 1. The revised calendar will host 18 Women’s WorldTour events that include five stage races, including a shortened Giro Rosa (September 11-19). There will also be 13 one-day races including La Course (August 29), the three Ardennes Classics – La Flèche Wallonne (September 30), Liège-Bastogne-Liège (October 4) and Amstel Gold Race (October 10) – along with Tour of Flanders (October 18), and the new Paris-Roubaix (October 25).

While racing has been halted, CCC-Liv has been actively involved in virtual rides and races offer on the Zwift platform. The team most recently participated in Tour for All where the team won four of the five stages; Marianne Vos won the opening stage and Ashleigh Moolman-Pasio won three stages.

"We now especially hope that the global situation (for everyone) will rapidly improves, that everyone will stay healthy and that economic damage will be limited," the spokesperson told Cyclingnews. "In times of no racing, we offer our sponsors and fans alternatives: weekly CCC-Liv Fan Rides on Zwift and Q&A sessions with sponsors on social media. Our riders will, of course, continue to prepare as well as possible for a re-start of the cycling season."