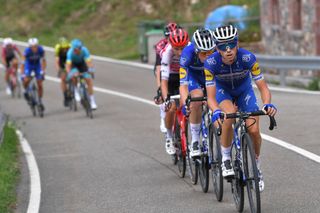 There were mixed emotions for James Knox on stage 16 of the Vuelta a España on Monday. The 23-year-old British climber missed out on the stage win atop the Alto de la Cubilla, but there was ample consolation in the form of his rise from 18th to 11th on general classification.

Knox had been quietly chipping away among the lower echelon of the GC riders, and had hoped to get into a break in the second or third week. It finally happened on the 144.4km stage that featured three major climbs in the Asturias mountains.

Valverde suffers but holds onto second in Vuelta a España

He was joined in the group of 19 by three teammates, in Philippe Gilbert, Remi Cavagna, and Max Richeze. They helped drive the move along before Knox responded to an attack from Jakob Fuglsang just under 10km from the top of the 17-kilometre final climb to form a selection of five.

With the best of the peloton finishing more than six minutes in arrears, Knox moved up sixth places and is now knocking on the door of the top 10.

"I'm really happy with that. It was a strange one, I was really committed at the start of the day to getting in the move - I felt like it was a good opportunity - and it all sort of worked out," Knox told Eurosport.

"I wanted to win the stage, so I'm a little bit disappointed, but I couldn't follow Fuglsang, so that's that. Then I got caught in that difficult moment of having a bit of a GC opportunity and just riding to save that in the end."

Indeed, when Fuglsang went clear from the five-man selection with Gianluca Brambilla, Knox found himself forced to bear all the workload in the chase group. Sanchez, Fuglsang's teammate, was never going to contribute, but Knox expected more from his compatriot and contemporary Geoghegan Hart, who sat behind before launching an attack to try and track down Fuglsang.

"Well, he flicked me, didn't he… he made me ride. I might have to flick him a message later," Knox said.

"He was doing his race, I was doing my race – that's bike racing. I would rather he worked with me – I'm not going to deny that – but he wanted to watch them go away. I had the responsibility there with being in a good GC position and jumping up the leaderboard, but how I saw it, if he worked with me, we could have come back. But he took his race, I took my race, and that's how it ended up."

In any case, Knox took heart from those who were riding with him – or for him. Deceuninck-QuickStep put three other riders in the break, and they all worked to set him up.

Knox put in a brief attack on the descent of the penultimate climb, but then Gilbert helped move things along before the break re-formed on the false flat approach to the Cubilla, where Cavagna drove the group along and didn't pull off until a few kilometres up the final climb.

"The one thing that really struck me was when it all came back together and it was just Cavagna on the front. I was like, 'right, okay, I've got a bit of responsibility now'," Knox said.